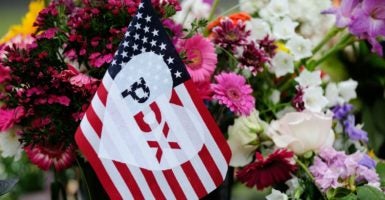 A memorial is pictured in Portland, Oregon, after Taliesin Myrddin Namkai-Meche and Ricky Best were fatally stabbed on a train for intervening in a situation where Jeremy Christian was hurling racial slurs at two teenage girls. Micah David-Cole Fletcher was also injured in the attack. (Photo: Alex Milan Tracy/Sipa USA/Newscom)

In response to the terrible violence on Friday, Portland Mayor Ted Wheeler wants to make the city a safe space, urging the federal government to block two controversial events slated to be held in the liberal enclave in early June.

But curbing free speech isn’t the right response—and Wheeler’s decision to do so now suggests someone who takes seriously Rahm Emanuel’s famous adage to “never let a serious crisis go to waste.”

In a Facebook message announcing he wanted “the federal government to IMMEDIATELY REVOKE the permit(s) they have issued for the June 4th event and to not issue a permit for June 10th,” Wheeler made it clear he was going to fight to prevent the “Trump Free Speech Rally” (scheduled for June 4) and the “March Against Sharia” (June 10) from going forward.

Our city is in mourning, our community’s anger is real, and the timing and subject of these events can only exacerbate an already difficult situation.

… I am appealing to the organizers of the alt-right demonstrations to CANCEL the events they have scheduled on June 4th and June 10th. I urge them to ask their supporters to stay away from Portland. There is never a place for bigotry or hatred in our community, and especially not now.” No doubt, Portland is grieving.

On Friday, two men were murdered and a third injured after intervening when a man “was yelling slurs at two teenage girls on the train, one of whom was wearing a hijab,” according to The Oregonian’s account.

And the suspect, Jeremy Christian, attended an event hosted by the organizer of the upcoming free speech rally June 4, although the organizer has claimed Christian was kicked out of the previous rally.

In talking to reporters Monday, Wheeler was also adamant, saying of the organizers that “[t]hey have a First Amendment right to speak, but my pushback on that is that hate speech is not protected by the First Amendment to the United States Constitution.”

There is no hate speech exception to the First Amendment. Hateful ideas (whatever exactly that might mean) are just as protected under the First Amendment as other ideas. One is as free to condemn, for instance, Islam—or Muslims, or Jews, or blacks, or whites, or illegal immigrants, or native-born citizens—as one is to condemn capitalism or socialism or Democrats or Republicans. As the Supreme Court noted in Christian Legal Society v. Martinez (2010), the First Amendment’s tradition of “protect[ing] the freedom to express ‘the thought that we hate’” includes the right to express even “discriminatory” viewpoints.

Of course, true hate speech is despicable—but letting the government define what constitutes hate speech is also problematic. It’s easy to imagine, for instance, a pro-abortion advocate saying that a pro-lifer’s proclamation that “abortion is murder” is hate speech.

And the fact that Wheeler, to the best of my knowledge, is not suggesting a way to let these rallies go forward at some specified future date suggests he is serious about blocking free speech in Portland in the long term.

That should concern everyone across the ideological spectrum who values a society that permits discussion and the articulation of ideas.

As the American Civil Liberties Union of Oregon puts it, “Our hearts are broken, but government censorship is not the answer.”

Our hearts are broken, but government censorship is not the answer. We must defend the constitution even when it is uncomfortable. https://t.co/7K33oLAbcZ

Our free speech is precious. Of course, Portland should mourn—and Christian should be punished for his heinous actions.

But the answer is not to make Portland a safe space and to curb the First Amendment rights of Oregonians.