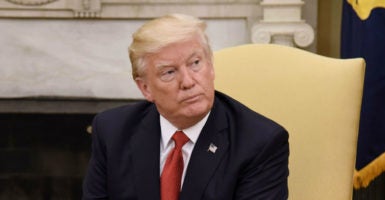 When people you know well, admire, and who share your values do something you strongly oppose, you have two options: 1) Cease admiring them, or 2) try to understand them and change their minds.

In the case of my conservative friends who still snipe (or worse) at President Donald Trump, I have rejected option one. The reason—beside the fact that I simply like many of them—is what I refer to as “moral bank accounts.”

These conservatives have made so many deposits into their moral bank accounts that, in my view, their accounts all remain firmly in the black.

That means my only choice is option two. But to try to change their minds, I must first try to understand their thinking.

I have concluded that there are a few reasons that explain conservatives who were Never-Trumpers during the election, and who remain anti-Trump today.

The first and, by far, the greatest reason is this: They do not believe that America is engaged in a civil war, with the survival of America as we know it at stake.

While they strongly differ with the left, they do not regard the left-right battle as an existential battle for preserving our nation. On the other hand, I, and other conservative Trump supporters, do.

That is why, after vigorously opposing Trump’s candidacy during the Republican primaries, I vigorously supported him once he won the nomination. I believed then, as I do now, that America was doomed if a Democrat had been elected president.

With the Supreme Court and hundreds of additional federal judgeships in the balance; with the Democrats’ relentless push toward European-style socialism—completely undoing the unique American value of limited government; the misuse of the government to suppress conservative speech; the continuing degradation of our universities and high schools; the weakening of the American military; and so much more, America, as envisioned by the Founders, would have been lost, perhaps irreversibly.

The “fundamental transformation” that candidate Barack Obama promised in 2008 would have been completed by Hillary Clinton had she taken office in 2017.

To my amazement, no anti-Trump conservative writer sees it that way. They all thought during the election, and still think, that while it would not have been a good thing if Clinton had won, it wouldn’t have been a catastrophe either.

That’s it, in a nutshell.

Many conservatives, including me, believe that it would have been close to over for America if the Republican candidate, who happened to be a flawed man named Donald Trump, had not won.

Moreover, I am certain that only Trump would have defeated Clinton.

In other words, I believe that Trump may have saved the country. And that, in my book, covers a lot of sins—foolish tweets included.

The Never-Trump conservative argument that Trump is not a conservative—one that I, too, made repeatedly during the Republican primaries—is not only no longer relevant, it is no longer true.

Had any Never-Trump conservative been told, say in the summer of 2015, a Republican would win the 2016 election and, within his first few months in office, appoint a conservative to the Supreme Court; begin the process of replacing Obamacare; bomb Russia’s ally, Syrian President Bashar Assad, after he again used chemical weapons; appoint the most conservative Cabinet in modern American history; begin undoing hysteria-based, economy-choking Environmental Protection Agency regulations; label the Iranian regime “evil” in front of 50 Muslim heads of state; wear a yarmulke at the Western Wall; appoint a U.N. ambassador who regularly condemns the U.N. for its moral hypocrisy; restore the military budget; and work on lowering corporate tax rates, among other conservative achievements, that Never-Trump conservative would have been jumping for joy. So, why aren’t anti-Trump conservatives jumping for joy?

I have come to believe that many conservatives possess what I once thought was a left-wing monopoly—a utopian streak. Trump is too far from their ideal leader to be able to support him.

There is also a cultural divide. Anti-Trump conservatives are a very refined group of people. Trump doesn’t talk like them.

Moreover, the cultural milieu in which the vast majority of anti-Trump conservatives live and/or work means that to support Trump is to render oneself contemptible at all elite dinner parties.

In addition, anti-Trump conservatives see themselves as highly moral people (which they often are) who are duty-bound not to compromise themselves by strongly supporting Trump, whom they largely view as morally defective.

Finally, these people are only human: After investing so much energy in opposing Trump’s election, and after predicting his nomination would lead to electoral disaster, it’s hard for them to admit they were wrong.

To see him fulfill many of his conservative election promises, again in defiance of predictions, is a bitter pill. But if they hang on to their Never-Trumpism and the president falls on his face, they can say they were right all along.

That means that only if he fails can their reputations be redeemed. And they, of course, know that.

But there is another way.

They can join the fight. They can accept an imperfect reality and acknowledge that we are in a civil war, and that Trump, with all his flaws, is our general. If this general is going to win, he needs the best fighters.

But too many of them, some of the best minds of the conservative movement, are AWOL.

I beg them: Please report for duty.