Sharing the Stories of Heroes This Memorial Day 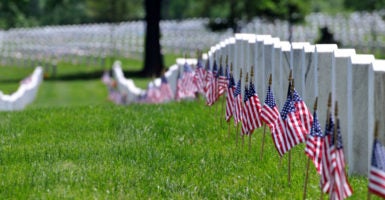 Memorial Day presents a unique challenge for Americans looking for ways to show gratitude to the fallen. (Photo: iStock Photos)

Many nations set aside days to celebrate the end of wars or major battles, and to honor those who fought in them.

Memorial Day in America is different in that it doesn’t celebrate veterans—we have a different day set aside for that. This federal holiday was designed to celebrate and honor those who have died while in uniformed service to our country in times of peace or war.

While noble in nature, the day presents a unique challenge to those of us who look for ways to show our gratitude.

Every year, my church goes long in its efforts to meet that challenge. In the heart of every Memorial Day service, our pastor asks those who have served in the military to stand, and as they do, the church body thanks them with a rousing, heartfelt round of applause.

The choir lifts the entire sanctuary with a battery of some of the most patriotic music you can imagine, and yet no matter how wonderful the veterans and congregation may feel at the end of each service, our collective efforts miss the mark.

As well intended as they are, my church isn’t alone in giving gestures that fall short.

Furniture stores and car dealerships use the occasion to offer special deals to serving military members. Pools open, and communities put on parades that feature local celebrities, marching bands, and veterans from the wars of our age.

Clans of family and friends gather in homes and parks throughout the United States to revel in the first of two holidays that frame the summer.

But almost all our Memorial Day revelry focuses on the living. There is little talk of those who gave their all, and even less about what that phrase might mean to one who has never leaned into the thought.

I guess we all need reminders.

I stumbled onto a collection of photos a few weeks ago that rekindled those thoughts in me. It was a site called the Wall of Faces. There, the names of the pictured men and women we lost in Vietnam are revealed with the move of a cursor.

As the arrow touched each picture, my mind raced to calculate the time that separated their birth and casualty dates. Some were a bit older and Vietnam was at least their second war, but the majority were under 20 when they died.

That’s when the second piece of math hit me.

In the 37 years beyond my 20th birthday, I met and married the woman I had been searching for my entire life.

I was there to welcome our two sons into this world, and I’ve been right by their side to celebrate those birthdays for all but a fraction of their years.

Somewhere along the way, I managed to climb into the dream I dreamed of as a child and, while the highs I’ve enjoyed as a man have been immeasurable, they don’t quite measure up to my all.

I’ve been given time enough to be a loving partner in life for my wife, and a doting father, shepherd, and coach for my two sons.

When I think about all that I’ve been given, I begin to get a sense of what others gave up when they gave us their lives.

Two men died of exposure during Gen. George Washington’s march on Trenton in the winter of 1776. Just over a year ago, 12 Marines were killed during a training mishap off the coast of Hawaii. And on Jan. 29 of this year, a Navy SEAL fell to enemy fire in Yemen.

Like those we’ve lost in every other conflict, incursion, or mishap, their stories run the gamut. Some were immortalized as heroes, and others have faded into near anonymity, save for the memories they left with the living.

In the course of my years in the service, I received the contagious laughter, the loves, and aspirations of 11 different men who laid down their lives. While each willingly gave up everything for this nation of ours, our gratitude is what will carry them forward in memory.

When you wake up Monday morning, take a moment to do your own math, then lean into your family and friends with a story about one of our Memorial Day heroes.

And when you hit your knees Monday night, say a prayer for those who long for the company, the loving touch of one who gave his or her all for you and me.