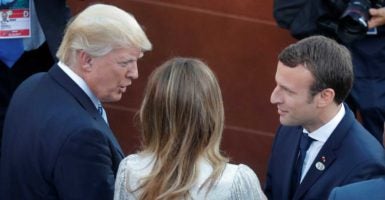 European countries and major corporations are pressuring President Donald Trump to remain in the Paris climate agreement despite his promises on the campaign trail to withdraw the United States from the Obama-era deal that never gained congressional approval.

The Trump administration so far is sticking with being undecided—at least until Trump returns to the United States from his first foreign trip, where on Friday, he’s meeting with Group of Seven ally countries, which support the agreement.

Back home, the pressure is growing from multinational corporations, even the energy sector, which have opposed stricter limitations on carbon.

“BP and Shell are European companies and it’s impossible to do business in Europe without towing the political line,” Myron Ebell, director of the Center for Energy and Environment at the Competitive Enterprise Institute, told The Daily Signal. He added that for oil and gas companies, “the only way to get the price of gas back up is to kill coal. The Paris Agreement kills fossil fuels, but it kills coal first.”

The Competitive Enterprise Institute sponsored an ad showing Trump during the campaign saying, “We are going to cancel the Paris climate agreement and stop all payments of the United States tax dollars to U.N. global warming programs.”

While corporate support might seem surprising, it’s very much the same old story for large companies seeking an advantage over smaller competitors, said Katie Tubb, a policy analyst with The Heritage Foundation.

“Big business and big government often go hand-in-hand. Big businesses generally can absorb and adapt to the costs of complying with burdensome regulation, of which Paris is a wellspring,” Tubb told The Daily Signal. “Smaller companies have a much harder time complying, which means less competition for big business. This is especially true if big business can influence the substance of regulations to favor themselves or freeze out competitors. I think in other cases; these large companies are just looking for PR points.”

President Barack Obama and Secretary of State John Kerry led the United States into the Paris climate change agreement, along with 170 other countries. The agreement commits member countries to shift their energy industries away from fossil fuels and toward green energy.

Two dozen major U.S. companies—including Apple, Microsoft, Google, Facebook, the Hartford, Levi Strauss, PG&E, and Morgan Stanley—sent an open letter to Trump published in The New York Times and other newspapers across the country, urging him to remain in the deal. The letter says:

By requiring action by developed and developing countries alike, the agreement ensures a more balanced global effort, reducing the risk of competitive imbalances for U.S. companies … By expanding markets for innovative clean technologies, the agreement generates jobs and economic growth. U.S. companies are well positioned to lead in these markets.

U.S. business is best served by a stable and practical framework facilitating an effective and balanced global response. The Paris Agreement provides such a framework. As other countries invest in advanced technologies and move forward with the Paris Agreement, we believe the United States can best exercise global leadership and advance U.S. interests by remaining a full partner in this vital global effort.

Generally, larger energy companies have an advantage under the climate deal, said Fred Palmer, senior fellow for energy and climate at the Heartland Institute.

“Follow the money,” Palmer told The Daily Signal. “There are companies that want to game the system of using [carbon dioxide] as a currency to make money.”

After meetings at the Vatican earlier this week, Tillerson said, “The president indicated we’re still thinking about that, that he hasn’t made a final decision.”

Ahead of the G7 meeting, Trump chief economic adviser Gary Cohn, the director of the White House National Economic Council, told a pool reporter Friday that the president is weighing both sides.

Ebell warned that if the administration seeks to make a deal to stay in the agreement, perhaps with a lower commitment than the Obama administration pledged, then a future president could simply increase the U.S. commitment. That’s why, Ebell said, it’s best for the United States to get out.

To be sure, many U.S. business groups oppose the Paris Agreement, such as the Industrial Energy Consumers of America—which represents manufacturers and other larger energy-using businesses—that wrote an April 24 letter to administration officials. The letter said:

We are the ones who eventually bear the costs of government imposed [greenhouse gas] reduction schemes. At the same time, we are often already economically disadvantaged, as compared to global competitors who are subsidized or protected by their governments.