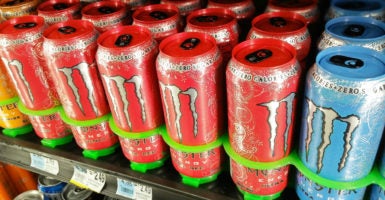 The health police are turning their sights to energy, calling for tobacco style regulations on caffeine and bans on energy drinks for young Americans.

Nutrition experts are calling on the federal government to heavily regulate the levels of caffeine permitted in energy drinks out of fear that the beverages are harming public health, particularly the youth.

Advocates are concerned there are no rules restricting energy drink manufacturers from marketing to those who face potentially fatal consequences from consuming the beverages, according to an op-ed in The Washington Post.

Pat Crawford and Wendi Gosliner, researchers with the University of California’s Nutrition Policy Institute, want the Food and Drug Administration to crack down on energy drinks with restrictions similar to those placed on alcohol. They argue that the FDA must “ban the marketing of energy drinks to young people of all ages,” and launched a public education effort on the dangers of caffeine.

“Caffeine is a strong and potentially dangerous stimulant, particularly for children and adolescents,” Crawford and Gosliner said in the editorial. “Making matters worse, consumers do not know the risks of the high levels of caffeine in an energy drink. Unlike coffee, energy drinks are widely marketed to adolescents, putting them at risk of extreme caffeine overload with potentially devastating cardiovascular and neurological consequences.”

The outcry to regulate the content and sale of energy drinks comes in the wake of the tragic death of Davis Cripe, a South Carolina teen who collapsed and later died April 26 after overdosing on caffeine. The teen had consumed a large Mountain Dew, a cafe latte from McDonald’s, and, according to classmates, chugged a 16-ounce energy drink over a span of two hours.

The influx of so much caffeine into his system over such a small period of time sparked a fatal cardiac event. His death brought caffeine back into the forefront of the public health debate, particularly the levels used by popular brands like Red Bull and Monster.

Crawford and Gosliner say that requiring companies to put labels showing caffeine content would be a good start, but say ultimately, stronger legal measures are needed. They note the American Academy of Pediatrics released a 2011 report saying that children and adolescents should never consume such products.