US Intelligence Leaks Are Threatening National Security. Here’s What the White House Can Do. 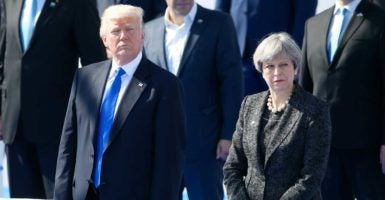 Classified information leaks to the media have often been framed as clash between the so-called “deep state” and President Donald Trump. However, Britain’s threat to stop intelligence sharing information with the United States demonstrates the larger problem.

“The president has made it very clear going back months that leaks threaten national security,” @PressSec says.

The BBC first reported Thursday that British police will stop sharing information with the United States on the Manchester terrorist attack after someone in the U.S. intelligence community leaked classified photos of the bomb site to The New York Times, which outraged U.K. officials. Later Thursday, Britain said after assurance, it would resume information sharing.

This came as a major concern to the Trump administration.

“The president has made it very clear going back months that leaks threaten national security and that he is outraged at these allegations and he wants to get to the bottom of it,” White House press secretary Sean Spicer said Thursday.

Prosecuting only a small number of leakers would send a strong message in protecting classified information, said Jordan Sekulow, executive director of the American Center for Law and Justice, a conservative government watchdog group.

“The deep state, or shadow government, is something this administration should know to expect retaliation from,” Sekulow told The Daily Signal. “We would strongly support impaneling a grand jury if one hasn’t been impaneled already, to investigate leaking of classified information.”

But such investigations aren’t simple and can bump up against the First Amendment, said Robert Ray, a former federal prosecutor, who was the independent counsel that completed Ken Starr’s investigation of former President Bill Clinton.

“It can be done but it is difficult and can be regarded as unseemly, which is not to disparage the importance of classified information,” Ray told The Daily Signal. “For proof leakers shared that information with the media, the reporter usually has to identify them. The press respects the anonymity process. To extract that information, as in the Valerie Plame case, it requires holding reporters in contempt, or even imprisonment, until the reporter yields, which can be terrible.”

Ray was referring to Valerie Plame, who worked for the CIA when her name was leaked to the media during the Bush administration. A New York Times reporter had to serve jail time for not revealing her source through the investigation.

Balancing matters with free press concerns should be handled with sensitivity, said Hans von Spakovsky, a senior legal fellow at The Heritage Foundation, and a former Justice Department lawyer. But, he said there is no constitutional right to not identify someone who illegally disclosed information that endangers national security.

“Using intelligence information to harm political opponents is one of the worst abuses,” von Spakovsky told The Daily Signal. “If a foreign intelligence cuts off information—as England is doing—that is not only someone breaking the law, that endangers national security.”

Earlier this year, the media published reports based on leaks of classified information about national security adviser Michael Flynn’s communications with Russian officials, which led to Flynn’s ouster from the job.

This month, The Washington Post first reported that Trump told Russian officials about classified information. The New York Times followed by reporting Israel was the source for the information Trump provided to Russia. After that, Spicer said there is “clearly a pattern” of agenda-driven leaks of classified information within the government to undermine the president. He didn’t give a definitive answer as to whether there was an investigation.

The leak on Britain likely began with a Trump-related leaker, said Steven Bucci, a visiting fellow at The Heritage Foundation, who is a former Pentagon official and former Army Special Forces officer.

“Once you begin the process of feeling it’s cool to be a reporter’s inside source, then it takes a life of its own,” Bucci told The Daily Signal. “I would bet a month’s pay that a person who had leaked about Trump also leaked this information.”

“This was not a whistleblower exposing government misconduct,” Ron Hosko, a former assistant FBI director for the bureau’s Criminal Investigative Division, told The Daily Signal. “This is a bureaucrat saying to a reporter, ‘Look at me, look what I know,’ maybe hoping the reporter will make him look good later on … There was no positive purpose for this leak.”

The British leak is one with “destructive and negative impact” into the investigation of the Islamic State’s attack on the concert, he said, adding the leakers should be “aggressively investigated and exposed.”

“This leak could alert the subject of the investigation what law enforcement knows, maybe allowing them to destroy valuable evidence, and give them the to opportunity to flee the jurisdiction and avoid arrest,” Hosko added.

The British Embassy in the District of Columbia didn’t respond to an email inquiry from The Daily Signal Thursday.