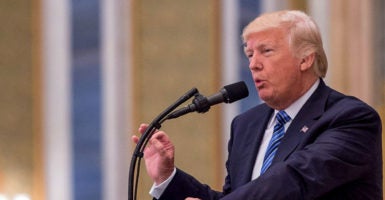 President Donald Trump spoke in Riyadh, Saudi Arabia, to over 50 leaders of Muslim-Arab nations, urging them to drive out terrorists from their lands. (Photo: Balkis Press/Sipa USA/Newscom)

President Donald Trump’s visit to the Middle East and Europe is framing the parameters of his foreign policy style.

That style is characterized by forcefully stating American priorities based on strong traditional alliances, religious inclusiveness, and national interest. In his speech to Arab leaders in Saudi Arabia, Trump called this approach “principled realism.”

Unlike the Obama years, Trump’s first four months in office have shown no trace of apology for the history of the United States and the global role that it plays.

This is an important—indeed refreshing—reversal. It has delivered a clear and unequivocal message about American foreign policy under Trump.

How that message is received depends on the context.

There was never any doubt that Trump would have a hard time getting a fair hearing for his policies in Europe, or anywhere else where the local media take their cue from the coverage of The New York Times, The Washington Post, and CNN.

However, in Saudi Arabia and in Israel—two allies who suffered great decline in their relations with the U.S. during the Obama years—Trump’s message of cooperation and solidarity in the face of terrorism was tremendously well received.

From a public diplomacy point of view, the absence of appointments and strategic public diplomacy directives from within the State Department to reach foreign publics has observers scratching their heads.

Yet if you take a step back, whether facing friends or skeptics, Trump is engaging in a classic public diplomacy exercise, whereby his public actions signal and advance his policy intentions.

The symbolism of Trump’s trip matches with the priorities he has consistently articulated since his presidential campaign.

His choice of countries for his first foreign trip is bold and displays his top concerns of reaching out to longstanding U.S. allies and of building coalitions against the greatest security threats, against “fanatical violence,” and a potentially nuclear-armed Iran.

The horrific bombing of an Ariana Grande concert in Manchester, United Kingdom, on Monday underscored the urgency of the president’s anti-terrorist foreign agenda.

“There is still much work to be done,” Trump told an unprecedented gathering of 50 Muslim-Arab leaders at the opening of the Saudi Global Center for Combating Extremist Ideology.

“That means honestly confronting the crisis of Islamist extremism and the Islamists and the Islamic terror of all kinds. We must stop what they are doing to inspire, because they do nothing to inspire but kill, and we are having a very profound effect if you look at what has happened recently.”

Trump continued: “It means standing together against the murder of innocent Muslims, the oppression of women, the persecution of Jews, and the slaughter of Christians.”

>>> Trump Is Not Pro-Russia, Despite What the Media Says

In Europe, Trump is signaling his seriousness about enlisting in this endeavor some of his most ardent critics, from Pope Francis to newly elected French President Emmanuel Macron, to leaders of NATO, the European Union, and the G-7.

Europeans have been apoplectic about Trump since his election.

This is in part because he is pressing them to live up to their NATO budget commitments, which makes them very nervous—but also simply because of who he is, much in the way the American left has reacted.

Yet, the message Trump has consistently delivered at every stop is that American leadership is back and ready to assert itself in the fight against the scourge of international terrorism.

Taking a break from Washington has allowed the president to get that message out.