Trump Is Not Pro-Russia, Despite What the Media Says 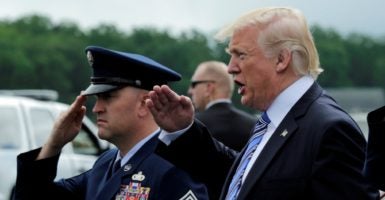 Apart from seeking to collaborate with Russia against ISIS, President Donald Trump has consistently been at odds with Russia in his foreign policy decisions. (Photo: Yuri Gripas/Reuters/Newscom)

Politically, no story is hotter than the one about President Donald Trump and the Russians.

Last week’s appointment of a special counsel to investigate Russian interference in the election keeps the story alive.

But abroad, Trump hasn’t helped the Russians. In fact, he’s opposed them.

Like many Americans, I completely rejected candidate Trump’s praise for Russian autocrat Vladimir Putin. The fact that President George W. Bush, President Barack Obama, and Hillary Clinton had also sought to get on Putin’s good side didn’t make Trump any less wrong.

By and large, Trump ran as an opponent of recent U.S. military interventions, including those in Iraq and Libya.

But he made an exception for U.S. action against the Islamic State, also known as ISIS, and he appeared to believe that the Russians were intervening in Syria to join that battle on the U.S. side.

That was a serious error. Russia’s goals in Syria were to prop up Bashar Assad’s regime and to support Assad’s regional patrons, the Iranians.

Putin’s airstrikes didn’t target ISIS. They targeted the rebels that we were ineffectively trying to support.

And that leads to the phony scandal about Trump’s sharing of intelligence with the Russians.

First, all the Americans in the room have rejected the claim that any secrets were shared.

But even if they were, this isn’t a crime. The collection and sharing of intelligence is an executive branch job, and the president has the right to make his own decisions in this realm.

Yet the fact that something’s not illegal doesn’t make it a good policy decision. Intelligence sharing with allies is smart, and we do it all the time.

The Russians, though, aren’t our allies, no matter how much Trump believes we’re both opposing ISIS. Even if we’re not giving them any secrets, we’re not going to get them to play ball by giving them Oval Office meetings.

But look at what the Trump administration has done in the rest of the world. It hasn’t acted like it believes in being buddies with Russia. Not at all.

There were concerns that Trump would try to buy Russian cooperation against ISIS by lifting the sanctions imposed on Russia for its invasion of Ukraine. Those sanctions have remained in place.

What’s more, the Trump administration has done what the Obama administration wouldn’t do: launch a cruise missile strike on the Russian-supported Syrian regime.

It also called out Russia for arming the Taliban and got Montenegro into NATO—a move the Russians opposed.

Earlier this month, Trump signed a bill prohibiting any U.S. funds from being used to support the Russian occupation of portions of the nation of Georgia.

The Obama administration’s ill-fated “reset” with Russia in 2009 was an effort to back away from the Bush administration’s belated recognition, after Russia’s invasion of Georgia in 2008, that Putin wasn’t a good guy.

So Trump’s support for Georgia isn’t just about opposing Russia. It’s a rejection of Obama’s effort to sidle up to Moscow.

If the Trump administration is supposed to be colluding with the Russians, they’re doing a terrible job of it.

They’ve opposed Russia in Europe, Afghanistan, Georgia, and Syria, while trying—and this is where the Oval Office meeting comes in—to get Moscow to oppose ISIS.

Trump’s effort to win over the Russians testifies to the emphasis the administration is placing on the war against the Islamists. That effort isn’t going to go anywhere: The Russians will play their own game in the Middle East.

Note: This article was originally published by Newsday.