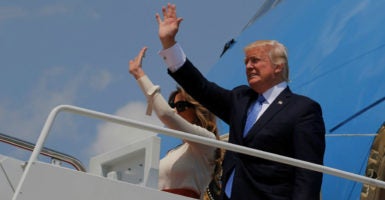 President Donald Trump will meet in Italy with leaders of the G-7 nations, who are committed to maintaining the 2015 Paris climate agreement. (Photo: Jonathan Ernst/Reuters/Newscom)

President Donald Trump has arrived in Italy for the G-7 summit, where foreign leaders will press him to abandon core elements of his “America First” agenda in favor of a more globalist agenda.

Leaders from those foreign nations should prepare for disappointment.

The start of the G-7 summit, held in the swanky coastal town of Taormina, located on the island of Sicily, just happens to be the one-year anniversary of Trump’s famous energy policy speech in Bismarck, North Dakota.

Then-candidate Trump made clear that his administration would “cancel the Paris climate agreement,” both because it was bad for America and because it violated our nation’s laws:

President [Barack] Obama entered the United States into the Paris climate accord unilaterally and without the permission of Congress. This agreement gives foreign bureaucrats control over how much our energy and how much we use right here in America. So foreign bureaucrats are gonna be controlling what we’re using and what we’re doing on our land in our country. No way. No way.

A lot can change in 365 days, but the fundamental flaws of the Paris Agreement that Trump identified have not.

Speaking to NPR’s Ari Shapiro last week, Royal Dutch Shell CEO Ben van Beurden rightly noted that “[o]f course it is the U.S.’s sovereign decision” on whether to pull out of the Paris Agreement.

America is a geographically diverse and expansive nation, which makes comprehensive global regulatory schemes difficult to implement without massive disruption.

In fact, during a recent speech in Harrisburg, Pennsylvania, Trump said “it is estimated that for compliance with the [Paris Agreement] could ultimately shrink America’s [gross domestic product] by $2.5 trillion … ”

The numbers get even worse, according to Heritage Foundation research.

By 2035, household electricity expenditures will increase between 13 to 20 percent, family of four income loss will exceed $20,000, and there will be more than 200,000 fewer manufacturing jobs due to the “policies adapted from domestic regulations emphasized in the Paris Agreement [that] will affect a variety of aspects of the American economy.”

According to the National Conference on State Legislatures, 21 states have either voluntary renewable energy standards or no standards, and 20 of those voted for Trump last November. Trump also won manufacturing states with mandatory renewable standards—states like Michigan, Ohio, and Pennsylvania.

Many of those voters found their voice in Trump.

Shell’s van Beurden told NPR that pulling out of the Paris Agreement would put the United States “off-site for such an important societal debate” and strongly implied that it would undermine America’s ability to “have a strong, meaningful, and impactful voice at all tables around the world.”

Of course, we have seen what happens when an American president kowtows to global elites in an effort to be heard and loved.

During his infamous apology tour, Obama told a group of foreign leaders that “with my election and the early decisions that we’ve made, that you’re starting to see some restoration of America’s standing in the world.”

He apologized to the Europeans for the “times where America has shown arrogance and been dismissive, even derisive.”

Trump’s election was a repudiation of that approach.

The path forward for the Trump administration is clear, and it begins with following through on the president’s pledge to withdraw from the Paris Agreement.

Doing so would restore certainty for America’s job creators and make it more difficult for future administrations to abuse the global warming agreement and advance destructive policy initiatives.

Enduring policy victories are the foundation upon which legacies are built.