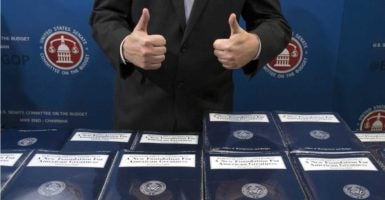 Congress should look to the following principles as it begins its work on the budget. (Photo: Kevin Dietsch/UPI/Newscom)

Although discretionary appropriations only account for one-third of the federal budget, they are critical in reducing the size and role of the government and provide an opportunity to make a down payment towards the national debt.

Since it was mere weeks ago that fiscal year 2017 appropriations were finalized, it is hard to be optimistic about the prospects for 2018.

Nevertheless, Congress should look to the following principles as it begins its important work on the budget:

The Budget Control Act was passed in 2011 with the intention of reducing total spending by more than $2 trillion and controlling the growth of federal programs. To do so, it adopted discretionary caps for defense and nondefense categories, enforced by automatic cuts (called sequestration), as well as a mandatory spending sequestration.

While the law has been moderately successful in controlling discretionary spending, Congress has undermined its effectiveness by amending the spending caps each year of their existence.

In 2013, implementation of the sequester was delayed for several months as part of the fiscal cliff deal and for 2014-2017 the caps were raised again, first by the Bipartisan Budget Act of 2013 and later by the Obama-Boehner budget deal. With total discretionary funding set to decrease by $6 billion in 2018, there is likely to be a desire from some in Congress to pass another budget deal that raises the spending caps.

Congress must resist this urge to spend more and should pursue prudent cuts, or stick to the current levels, at the very least. The president’s budget proposes a total discretionary spending level of $1.1 billion, in line with the Budget Control Act caps. This is the maximum level of funding that Congress should support in 2018.

As part of the Budget Control Act, discretionary spending was arbitrarily divided into defense and nondefense categories. Providing for national defense is the primary responsibility envisioned by the Founding Fathers when they established our government.

Trump’s budget calls for abandoning the defense and nondefense categories, instead raising defense spending by $54 billion and offsetting that increase with cuts to domestic programs. That’s the fiscally responsible way to properly prioritize among competing demands for taxpayer dollars.

The increase proposed by the president is the minimum needed to begin rebuilding a stronger military. According to the Heritage Foundation director of the Center for National Defense, “This increase on its own is insufficient to begin the rebuilding. It simply represents an ‘on-ramp’ to rebuilding.”

The Budget Control Act cap on defense spending has been a detriment to our national security and must be abandoned. Congress should adopt the level of funding needed to fully equip our military against growing threats worldwide.

These increases should be offset by the reduction or elimination of inefficient domestic programs that limit individual and economic freedom and that have usurped functions that are better left to the private sector, and states and localities.

The last time that Congress passed all 12 annual appropriations bills prior to the start of the fiscal year was 1996. Instead, lawmakers continue to rely on continuing resolutions and massive omnibus spending bills. This is not an effective way to govern and it does a disservice to taxpayers.

With the president’s budget delayed more than three months and Congress not expected to release its own budgets until at least mid-June, Congress is already way behind schedule.

Regardless of the late start, Congress should look to pass as many appropriations bills as possible, starting with Department of Defense appropriations, through regular order. Following the congressional budget process facilitates a higher level of debate and increased oversight and accountability over federal government programs and agencies.

In fiscal year 2016, Congress provided more than $310 billion in appropriations to unauthorized agencies and programs. Authorizing programs is a key component of Congress’ oversight responsibility. It provides an opportunity to examine and prioritize the activities that receive taxpayer dollars carefully. Lack of oversight has contributed to increased spending and rising debt levels.

5. Seize the Opportunity for Reform.

Congress must use the fiscal year 2018 appropriations process as an opportunity to reassert its commitment to control spending. Congress should reject any attempt to increase the overall discretionary spending level.

Defense should be the highest priority and needed increases should be fully offset with cuts to nondefense programs. With republicans in control of the White House and Congress, there is no better time than now to pursue a conservative budget.

The Heritage Foundation’s “Blueprint for Balance” lays out more than 100 discretionary policy options that could be implemented in 2018, saving taxpayers $87 billion in 2018 alone.

Continuing the failed policies and spending addiction of the past few years is not the answer.