Manchester Explosion: UK Has Been Targeted by Terrorists ‘Time and Time Again’ 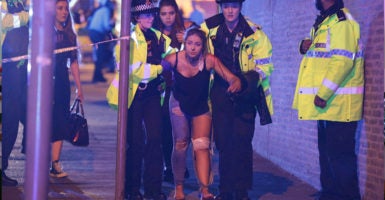 Concertgoers, many of them young, frantically flee the scene Monday night in Manchester, U.K., after an explosion just outside Manchester Arena. (Photo: Joel Goodman/Zuma Press/Newscom)

At least 19 people were killed and at least 50 injured in a suspected suicide bomb explosion Monday night at an arena in Manchester, England, where U.S. pop singer Ariana Grande was performing a concert.

Police said they were treating the explosion just outside the arena as a terror incident until they “know otherwise.”

Robin Simcox, a terrorism and national security expert at The Heritage Foundation, said the United Kingdom has been a target of Islamist terrorists “time and time again.”

“Even though the U.K. has world-class security services,” Simcox added, “this is a numbers game—and the amount of terror suspects in the U.K. is so high that it is impossible for authorities to be able to keep track of everyone that is of concern.”

The explosion occurred about 10:35 p.m. local time outside the Manchester Arena as people were exiting after the concert. The arena has the capacity to seat 21,000.

Videos shared online shows concertgoers, many of them tweens and teens, frantically fleeing a chaotic scene.

Some used Twitter to desperately search for loved ones who had attended the concert.

WE CAN DO THIS!! Don't stop retweeting before everyone is found and safe #Manchester pic.twitter.com/cwNly9H9ta

Andy James, an eyewitness who attended the 23-year-old singer’s concert in Manchester, told CNN the boom felt like it “rattled in my chest.” After the explosion, he said, there was “a stampede of people.”

Concertgoer says reported explosion at Manchester concert felt like it "rattled in my chest" https://t.co/mHhhwZONt9 https://t.co/629lAINMXV

Chris Pawley, another eyewitness, told Fox News the explosion occurred in an area just outside the arena where parents were waiting to pick up their “young children and teenagers.”

European Parliament member Nigel Farage said that if the explosion is confirmed as an act of terror, it will be a “new low” for terrorists.

“The direct attack on children … marks a new low in all forms of terrorism,” Farage said on Fox News.

NEW: video from inside the Ariana concert in Manchester when the explosion took place. pic.twitter.com/yDrcoqhu8J"

A publicist for Grande told The New York Times during the initial confusion that the American singer and actress was “OK.”

TMZ later reported Grande to be “in hysterics” over the carnage, and Sky News reported her world tour had been suspended. Grande tweeted:

broken.
from the bottom of my heart, i am so so sorry. i don't have words.

Her “Dangerous Woman” tour, which kicked off Feb. 3 in Phoneix, had been scheduled to take the singer to London for concerts Thursday and Friday, followed by cities in Belgium, Poland, and Germany.

The explosion coincided with President Donald Trump’s visit to the Middle East, where on Sunday in Saudi Arabia he urged Arab leaders to step up the fight to “drive out” Islamist terrorists and extremists. Trump was briefed on the explosion in Manchester, according to NBC News.

This report has been updated to include ISIS’ claim of responsibility and the name of the bombing suspect.