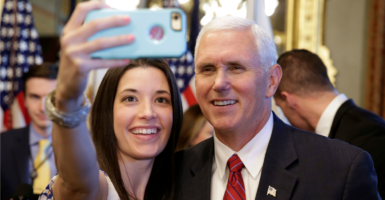 Diversity of thought continues to be decidedly unpopular at America’s top institutions of higher education.

According to a new survey from Young America’s Foundation, top colleges invited 45 liberal commencement speakers this year … and a measly four conservatives. (Not all of the universities, which were drawn from U.S. News and World Report’s list, had announced a commencement speaker. Others had multiple speakers or speakers without clear ideological viewpoints.)

Of course, these numbers aren’t surprising.

And while the media is fixated on the hundred or so students who walked out of Pence’s speech at Notre Dame (never mind the vast majority who stayed seated), the bigger story is the lack of ideological diversity at America’s colleges. Consider these facts:

— “By 2014, liberal identifiers [among college faculty members] jumped to 60 percent, with moderates declining to 30 percent and conservatives to just 10 percent,” wrote Samuel J. Abrams, a research fellow at Stanford University’s Hoover Institution, in The New York Times. In other words, for every one conservative professor, there’s about six liberal ones.

— A 2007 survey found that “Faculty members were more likely to categorize themselves as moderate (46.1 percent) than liberal (44.1 percent). Conservatives trailed at 9.2 percent,” reports Inside Higher Ed.

I have no doubt many liberal professors believe themselves to be open-minded and perhaps even cultivate classrooms where conservative students feel free to speak and make their case. But for nonpolitical students, having almost entirely liberal or moderate professors may further solidify their liberal or moderate mindset—and they’ll never have to encounter a solid argument from the other side.

And that’s a shame.

After all, too many millennials these days may be rejecting conservative principles not because they have found those principles unpersuasive, but because they’ve never been exposed to a serious argument advancing them.

Universities once prided themselves on freedom of thought. It’s too bad they’ve become such safe spaces for conventional liberal thinking.

In his speech at Notre Dame, Pence decried just that, saying, “Far too many campuses across America have become characterized by speech codes, safe zones, tone policing, administration-sanctioned political correctness—all of which amounts to nothing less than suppression of the freedom of speech.”

“As you, our youth, are the future, and universities, the bellwether of thought and culture,” he added. “I would submit that the increasing intolerance and suppression of the time-honored tradition of free expression on our campuses jeopardizes the liberties of every American.”

Pence is right that the lack of diversity of thought in colleges could have long-term effects. Culture matters—and if colleges were more interested in spurring intellectual debate and discussion, commencement speakers would be a lot more ideologically diverse.