Trump Expected to Propose Plan to Balance Budget in 10 Years 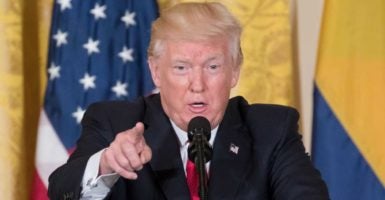 President Donald Trump takes questions from the press in the East Room of the White House Thursday during a joint news conference with Colombian President Juan Manuel Santos. (Michael Reynolds/EPA/Newscom)

President Donald Trump likely will propose a plan next week calling for a balanced budget in 10 years, fiscal experts predict. It also will address how to fund the border wall, higher defense spending, and other Trump initiatives over the next decade.

“Many Republicans have been calling for a 10-year balanced budget,” Chris Edwards, director of tax policy studies at the Cato Institute, told The Daily Signal. “One way they may show savings for that 10-year period is through management and downsizing reform efforts.”

Mick Mulvaney, director of the Office of Management and Budget, took an initial step last month in rolling out government reforms that the administration intends to expand on later this year.

A budget proposal that allows a president to demonstrate how committed he is to campaign pledges and gives a glimpse of plans to make $54 billion in cuts to foreign aid and nondefense discretionary spending is a good sign, Edwards said.

“One role of a federal budget proposal is for the president to create a bully pulpit to argue for cuts,” Edwards said. “Even if Congress doesn’t go along with phasing out things such as NPR [National Public Radio] and PBS [Public Broadcasting Service] this year, proposing this creates a needed national discussion.”

Still, without entitlement reforms and with projected increases for infrastructure spending, projecting a balanced budget in 10 years would be based on very optimistic economic assumptions, said Romina Boccia, deputy director of the Thomas A. Roe Institute for Economic Policy Studies at The Heritage Foundation.

“If the OMB numbers are higher than what the [Congressional Budget Office] and nonpartisan assessments are reflecting, it might be questionable. Balancing in 10 years relies heavily on economic growth,” Boccia told The Daily Signal.

Trump and Mulvaney have said their goal is for the United States to surpass 3 percent annual growth again.

An OMB spokesperson told The Daily Signal that the office is still working on the rollout and would have details later.

The White House released a budget blueprint in March that focused only on the fiscal year 2018 budget. But next week, the fiscal plan will project out for the next decade.

The fiscal 2018 plan addressed only discretionary spending. The proposal to be released Tuesday will look at the other two-thirds of the budget, which is mandatory spending and mostly goes to entitlement programs such as Medicaid, Medicare, and Social Security.

Both Edwards and Boccia anticipate that the proposal will address fraud in the Medicaid and Social Security disability programs.

Among details the public will learn more about:

Lawmakers on the House and Senate budget committees likely will be eager to see how proposals for tax reform and reorganizing the government will affect future years, and how that in turn affects budget negotiations, she added.