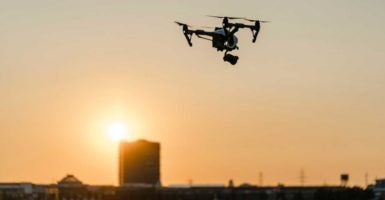 Flying a drone even a single inch above one’s own backyard before registering had been deemed a federal felony. (Photo: Kniel Synnatzschke Westend61/Newscom)

A three-judge panel on the U.S. Court of Appeals for the D.C. Circuit unanimously declared Friday that the Federal Aviation Administration’s registry of recreational drone owners is “unlawful as applied to model aircraft.”

As a result, hobby drone fliers across the nation no longer face the specter of $277,500 in civil and criminal fines, as well as jail time, merely for failing to identify themselves to the FAA.

In late 2015, the FAA for the first time made the decision to subject recreational drone fliers to mandatory registration. Beginning on Dec. 21—just days before Christmas—anyone who owned a drone weighing more than 0.55 pounds at takeoff (helpfully, the FAA indicated this was the equivalent of two sticks of butter) would be required to register themselves pursuant to a statute authorizing the registration of aircraft. To comply, hobbyists had to provide regulators with detailed personal information and pay a $5 registration fee.

Flying a drone even a single inch above one’s own backyard before registering was deemed a federal felony.

At the time, the agency noted that surging demand for small quadcopters and other models of unmanned aircraft systems necessitated quick action. Taking advantage of the “good cause” exemption under the Administrative Procedure Act, the FAA bypassed the normal notice and comment process and pushed the registration rule into effect in a mere two months.

There was, however, one significant legal hurdle. As we wrote at the time, the FAA’s rushed regulatory action ran directly afoul of a statute passed by Congress, the 2012 FAA Modernization and Reform Act. Section 336 of that law specifically states that “the Administrator of the Federal Aviation Administration may not promulgate any rule or regulation regarding a model aircraft.”

The agency has attempted to bypass this statutory prohibition by consistently claiming that the new rule was not, in fact, a new rule. The FAA always had authority to register model aircraft, this line of reasoning goes, but merely exercised discretion in opting not to.

One drone owner, John Taylor, disagreed and filed suit. In the unanimous opinion by Judge Brett Kavanaugh, joined by Judges Robert Wilkins and Harry Edwards, the court was clear: “Taylor is right.”

In his opinion, Kavanaugh acknowledges the agency’s longstanding authority to register aircraft—a process that “is quite extensive, as one would imagine for airplanes.” Kavanaugh goes on to correctly note, though, that “the FAA has not previously interpreted the general registration statute to apply to model aircraft.”

Indeed, in 1981 the agency published Advisory Circular 91-57, “Model Aircraft Operating Standards,” and made compliance entirely voluntary. A 2007 notice published in the Federal Register espoused a new regulatory scheme for drones, subdividing them into public, commercial, and recreational aircraft, and prohibiting flights “without specific authority … For model aircraft the authority is AC 91-57.”

In other words, as the court pointed out, the 2007 “notice did not alter the longstanding voluntary regulatory approach for model aircraft”—an approach which Congress codified in Section 336 of the 2012 FAA Modernization and Reform Act.

But is the registry requirement a rule promulgated in violation of the “clear statutory restriction on FAA regulation of model aircraft,” as Taylor alleged, or merely a decision to “enforce a pre-existing statutory requirement,” as the FAA contended?

To answer this, the court looked first to the definition of “rule” contained in the Administrative Procedure Act, finding that the registry was indeed a “statement of general or particular applicability … designed to implement, interpret, or prescribe law or policy.” It then considered the scope of the registration requirement, which includes “model aircraft” and defines the term identically to its definition in the 2012 law. For the court, this could lead to only one conclusion:

The court found the FAA’s counter arguments “unpersuasive.” The registry requirement was no mere ending of enforcement discretion, but a “rule that creates a new regulatory regime for model aircraft,” replete with “new requirements” for hobbyists and “new penalties” to which those hobbyists are subjected.

A Victory for the Rule of Law

The judges’ swift dismissal of this line of reasoning is hardly surprising. In one telling exchange at oral argument, the FAA asserted that the rule was merely an enforcement of existing law that the 2012 statute in no way hindered, prompting one judge to retort, “You’re just making stuff up. That’s not what the statute says.”

FAA arguments that the registration rule is needed on policy grounds were similarly rejected. Though “[a]viation safety is obviously an important goal,” the court noted that judges are bound to “follow the statute as written.”

In other words, if federal law is to be rewritten, it is neither a judge nor a regulator who is constitutionally empowered to do so. That responsibility falls squarely—and exclusively—on the shoulders of Congress.

The FAA’s recreational drone registry may have been struck down, but its commercial drone regulations were not at issue, and remain in force. The FAA’s ability to preserve the integrity and safety of the national airspace is similarly unaffected. Section 336(b) of the 2012 law affirms the “authority of the Administrator to pursue enforcement action against persons operating model aircraft who endanger the safety of the national airspace system.”

Friday’s opinion out of the D.C. Circuit is thus a victory not only for Taylor, but for the rule of law itself. Hundreds of thousands of hobby fliers who, only this morning, were subject to arbitrary and extreme federal criminal penalties have been granted a reprieve—at least for now. It remains to be seen whether the FAA will appeal.

Hopefully, though, the agency will treat the decision as a learning opportunity rather than a speed bump, and re-hew its drone policy to the letter and spirit of the law.