Who Wins and Who Loses Under These 8 Big Government Policies 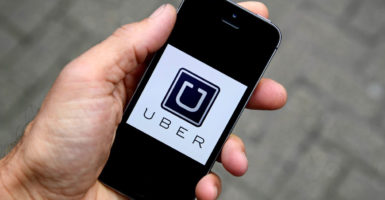 In a number of localities, governments are over-regulating and even banning certain innovative businesses that threaten to upset an established industry. (Photo: Toby Melville/Reuters/Newscom)

It’s clear that many big government policies are creating winners and losers in America.

The story has been the same for decades. Government makes friends with a company or an industry, blocks out the competition with regulation, and in some cases gives the company subsidies.

Such cronyism is bad for innovators and for consumers. But fewer people realize that it’s also bad for the poor.

A recent report from The Heritage Foundation detailed 23 of these big government policies that hurt the poor, and provided concrete ways to address them.

The winners are a small group of identifiable government cronies, while the losers include people of little or no influence with the government.

Here is a look at eight big government policies from the report that benefit government cronies at the expense of other groups of people, including the poor.

The Energy Policy Act of 2005 mandated that renewable fuels be mixed into America’s gasoline supply, primarily by using corn-based ethanol. Then, the 2007 Energy Independence and Security Acts significantly increased the amount that must be mixed in.

This mandate is known as the Renewable Fuel Standard. It forces the use of higher levels of biofuels than the market would otherwise bear. The result has been higher food and fuel prices.

Who Loses: Consumers of gasoline, consumers of food, and farmers that rely on feedstock and restaurants.

The federal government tries to limit the supply of sugar that is sold in the United States.

This federal sugar program uses a combination of price supports, marketing allotments that limit how much sugar processors can sell each year, and import restrictions that reduce the amount of imports.

As a result, the price of American sugar is consistently higher than world prices.

Who Loses: Workers in sugar-using industries, and consumers of food (including bread) that contains sugar.

As a result of the U.S. Department of Agriculture’s catfish inspection program, the USDA inspects catfish while the Food and Drug Administration inspects all other seafood.

This creates duplication because seafood processing facilities that produce both catfish and any other seafood will have to deal with two different types of seafood regulatory schemes instead of just one.

This program also creates a non-tariff trade barrier that will make it extremely difficult for foreign catfish exporters to export to the U.S., likely reducing competition for the domestic catfish industry.

The Merchant Marine Act—nicknamed after Sen. Wesley Jones, R-Wash.—requires the use of domestically built ships when transporting goods between U.S. ports. The ships must also be U.S.-owned, and mostly U.S.-crewed.

Who Loses: The U.S. military, automobile drivers, users of propane and heating oil, and anyone benefitting from the trade and transportation of goods between U.S. ports.

Licensure laws create government requirements for being allowed to practice a profession. These requirements exist even though the market would produce certification options if consumers desired such information.

Who Wins: Workers who have already obtained licenses.

Who Loses: People wanting to work who can’t because they don’t have a license, and consumers who have to pay higher prices for services.

On June 23, 2005, the U.S. Supreme Court held in Kelo v. City of New London that the government can seize private property and transfer it to another private party for economic development.

This type of taking was deemed to be for “public use” and ruled a proper use of the government’s eminent domain power under the Fifth Amendment of the United States Constitution.

Who Wins: People who successfully lobby the government to seize other people’s property for financial gain.

Who Loses: Property owners who have their property seized.

Local governments sometimes ban or excessively regulate home-sharing—that is, renting out one’s home to accommodate travelers, such as through Airbnb.

When this happens, consumers have less choices of where to stay when traveling, hotels can charge higher prices, and homeowners and renters can’t make full use of their legally possessed homes to earn income for themselves.

Who Wins: Hotel employee union lobbies, and the hotel industry.

Who Loses: Homeowners and renters.

In some state and local jurisdictions (such as outside Portland, Oregon; Alaska; and Austin, Texas), the government bans or heavily regulates ride-sharing companies like Uber and Lyft.

These companies are popping up all over because they meet consumers’ needs, but they are being held down in certain cities where the government backs the establishment industry.

Who Loses: Uber, Lyft, and drivers looking for low barriers to entry; taxicab customers; customers who want to go in or out of certain neighborhoods that traditional taxi drivers avoid; and users of public transportation seeking to complete the “last mile” of their trips.

When industries or groups win special favors from politicians at the expense of ordinary Americans and the poor, it is an affront to freedom—especially to the economic freedom of the poor.

Policies that drive up prices—especially of commodities—are harder to absorb if you are poor.

>>> Read The Heritage Foundation’s special report, “Big Government Policies That Hurt the Poor and How to Address Them.”

The policies listed above can block off the only escape route that poor people have from poverty, preventing them from doing what they are good at for a living, for example, or from renting out their home or other property.

All Americans should have the same opportunities open to them. But when government cronyism rears its ugly head, they don’t.

Those who fall on the losing side of cronyism are more likely to agree with President Ronald Reagan when he said, “The nine most terrifying words in the English language are: I’m from the government and I’m here to help.”