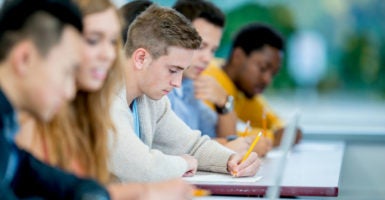 The Higher Education Reform and Opportunity Act would allow states to set up their own accreditation systems, creating space for innovative reforms in higher education. (Photo: iStock Photos)

But over that same time, the price of college tuition has risen 199 percent, and most parents would agree that the quality has not greatly improved.

But if prices typically fall as competition spurs quality advancement, as seen by the technological achievement of the last two decades, how has that not happened in education?

There is no one simple answer to this question, but the different regulatory environment facing higher education is a significant factor.

One hundred years ago, there were six regional, voluntary, nongovernmental institutions that helped universities and secondary schools coordinate curricula, degrees, and transfer credits. These institutions had no power to prevent the creation of higher education institutions.

After congressional investigators found thousands of sham colleges were created overnight to take advantage of the benefits provided in the first 1944 GI Bill, the federal government turned these voluntary institutions into accreditors.

As the federal government steadily ramped up its financial support for higher education benefits, it continued outsourcing the vetting of higher education institutions to these regional accreditors.

This makeshift system worked well for decades, but in recent years these regional accreditors have come under heavy criticism for both lax oversight over some online institutions and a heavy hand in killing some promising innovations.

No regulator is ever going to be perfect, but if they are going to be gatekeepers for a sector of the economy as important as higher education, they must be transparent and accountable to the American people.

Unfortunately, our nation’s regional accreditors are neither. They do not share how they make their accrediting decisions with anyone and their board members do not face accountability at the ballot box.

This needs to change.

That is why I have introduced the Higher Education Reform and Opportunity Act. This bill would allow states to create their own accreditation system for institutions that want to be eligible for federal financial aid dollars.

Each state could then be as open or closed to higher education innovation as they saw fit. They could even stick with their current regional accreditors if they chose to do so.

But they could also enable innovators like Purdue University President Mitch Daniels, who recently signed a deal with the online provider Kaplan University, to go even further in their mission to expand higher education access to those who had limited access before.

Our higher education system should not be held captive to 100-year-old institutions that were never intended to be regulatory gatekeepers in the first place.

Instead, we should allow those communities that want to experiment with higher education policy the freedom and accountability to do so.