I’m a Conservative Senator. Here Are Some Changes I Want to See in Obamacare Replacement 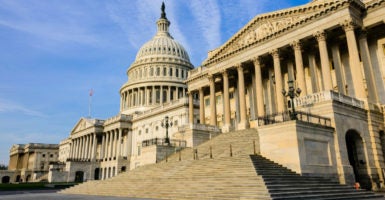 A working group of U.S. Senate Republicans, including conservatives and moderates, are meeting to find consensus on a replacement of Obamacare. (Photo: iStock Photos)

This week, a working group of United States senators began meeting on a biweekly basis to reach a consensus on how to repeal and replace Obamacare.

We are still very early in the process, but it is clear already that there is much work to be done before we can find the votes needed to reform our failing health care system.

The first topic the group focused on was rolling back Obamacare’s Medicaid expansion, a program that has given insurance cards to 11 million able-bodied adults without kids at a cost of $64 billion a year without improving their actual health care outcomes.

Conservatives in the room have three big priorities when it comes to Medicaid reform:

This categorical expansion is already a huge concession and should, at the very least, be part of a program reform that grows at a low rate closely resembling historical growth.

That is why many of my colleagues and I want to put the reformed per capita allotment Medicaid program on a sustainable fiscal path with a growth rate of the Consumer Price Index for All Urban Consumers (CPI-U).

Hopefully, we will be able to also include additional flexibility for states to innovate and adopt new mechanisms that serve the unique needs of each state’s vulnerable populations.

The health care working group also addressed the individual insurance market, where conservatives pushed to repeal as many of Obamacare’s insurance regulations as possible.

The Obamacare regulations drive up the cost of health care the most.

They force insurers to cover everyone at the same price without respect to age, gender, or health status—even if these customers use drastically different amounts of health care each year, or if they wait to purchase coverage until they fall ill.

Another major regulation forces insurers to pay for an expansive list of “essential health benefits,” even when the customer doesn’t need or want to pay for that coverage.

Finally, another burdensome regulation tightly dictates how much insurers must pay out on each health care plan.

All of these regulations have driven up the price of premiums by 100 percent nationwide—in some places, monthly premiums cost more than someone’s mortgage.

Conservatives would like to clear the books of Obamacare’s most costly regulations and free the states to regulate their markets how they wish—even if that means reapplying these regulations to their markets.

Should this not be possible, we should at the very least give states the ability to choose which Obamacare regulations they do or do not want to keep.

All states would start off without any of these federal health insurance regulations, and then they would be able to pick and choose which ones they want to keep.

After the debate in the House, it is no longer news that the differences between the moderates and conservatives in the Republican Party on health care policy are substantial. It is unclear right now whether they can be bridged.

But my colleagues and I will keep trying.

We will keep meeting every week to hash out our differences and find common ground until we get something done that will lower premiums for millions of Americans, while strengthening our safety net programs for those who truly need them.