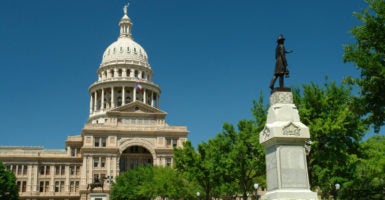 His bill "gives you the right to decline something because of your religious belief," Texas state Rep. James Frank says. (Photo: Andre Jenny/Stock Connection Worldwide/Newscom)

Texas lawmakers are debating a bill that shows how states can protect faith-based adoption and foster care providers from religious discrimination, proponents of the legislation say.

The Texas House of Representatives voted 93-49 Wednesday to pass a bill that would make room in a changing society for adoption and foster care providers associated with a religious tradition, whether Catholicism, Protestantism, Judaism, or Islam.

The bill now moves to the Texas Senate, where a vote is expected before the legislative session ends May 29.

The intent of the legislation, Frank said, is to prevent faith-based organizations from being forced to violate their beliefs, such as by arranging for same-sex couples to adopt or provide foster care.

The bill allows such providers to decline service and refer a couple to another organization, said Frank, whose 69th District includes Archer, Baylor, Clay, Foard, Knox, and Wichita counties.

The bill “is yet another example of Texas legislators’ coordinated efforts to pursue discrimination against LGBTQ people instead of focusing on the best interest of all Texans,” Rouse said in a statement provided to The Daily Signal.

“If signed into law,” Rouse said, “this bill would most harm the children in Texas’ child welfare system—kids who need a loving, stable home.”

To the contrary, the legislation “seeks to build and sustain a diverse network of high-quality child welfare providers to serve Texas children,” according to a statement from Frank’s office, which adds:

Republicans control both the Texas state Senate and House. Gov. Greg Abbott, a Republican, has not commented publicly on the bill. Lt. Gov. Dan Patrick’s office did not reply to The Daily Signal’s request for comment.

The legislation, called the Freedom to Serve Children Act, also seeks to protect faith-based organizations that decline to serve same-sex couples or other parties from litigation and the threat of closure for acting on their beliefs.

Appreciate support of colleagues expanding religious liberty and making sure we have a home for every Texas child. #hb3859 pic.twitter.com/mOYaFQT32I

In a Facebook post, Frank said the bill “requires the Department of Family and Protective Services to ensure alternative providers are present to offer any service denied for reasons of sincerely held religious beliefs.”

But Sarah Kate Ellis, president and CEO of GLAAD, an activist group dedicated to promoting lesbian, gay, bisexual, and transgender rights, decried the legislation in a statement to TeenVogue.

“It’s horrific that the Texas House would allow state-funded or private adoption agencies to use religious exemptions as a weapon to ban qualified LGBTQ families from adopting a child,” Ellis said, adding:

Rebecca L. Robertson, legal and policy director of the ACLU of Texas, agrees.

“Discrimination in the name of religion has no place in our laws or in our state, and it certainly should not be used to harm children,” Robertson said in a statement provided to The Daily Signal.

Frank, however, said his legislation would not remove opportunities for children seeking a home.

“Not one foster parent [or] family who wants to provide a home for our kids will be denied from doing so,” Frank said.

Ryan T. Anderson, a senior research fellow at The Heritage Foundation who writes about religious freedom and whose new book is “Debating Religious Liberty and Discrimination,” told The Daily Signal in an email that the legislation would not harm any party’s rights.

“The Texas law takes nothing away from anyone,” Anderson said, adding:

It doesn’t prevent same-sex couples from adopting, it simply prevents any given agency from being penalized for not doing a same-sex adoption, if doing so would violate its beliefs. The law simply protects pluralism and diversity, inclusion for child welfare providers. It’s unclear why anyone would be against that.

The Child Welfare Provider Inclusion Act of 2017, referred to the House Ways and Means Committee, would ensure that adoption and foster care providers aren’t barred from “offering these services based on their religious beliefs,” according to a statement from Kelly’s office.

Justin Butterfield, senior counsel at First Liberty Institute, which calls itself “the largest legal organization in the nation dedicated exclusively to protecting religious freedom for all Americans,” argues that the Texas legislation opens up more opportunities for children in need of homes.

“This bill promotes inclusivity and diversity among adoption and foster care agencies, which increases the number of paths for children to be connected with adoptive families,” Butterfield said.