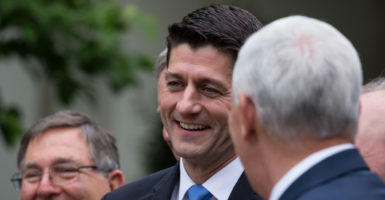 American Action Network, a group aligned with House Speaker Paul Ryan (pictured), is running ads in the speaker's district urging constituents to thank him for his work on a bill repealing and replacing Obamacare. (Photo: Cheriss May/ZUMA Press/Newscom)

House Republicans fielding questions from constituents over their bill repealing and replacing Obamacare are getting some cover from GOP-aligned groups on the airwaves and online.

Republican lawmakers passed their health care bill last week and headed home to their districts for a weeklong recess. Upon arriving home, some GOP lawmakers are hosting town halls, where they’ve been facing constituents angry over the bill repealing and replacing the 2010 health care law.

At a townhall in Midlothian, Virginia, Rep. Dave Brat, R-Va., confronted constituents who were angered by the conservative congressman over his support for the House GOP’s health care bill.

Rep. Rod Blum, R-Iowa, also faced unhappy voters at a town hall Monday, many of whom yelled at the House Freedom Caucus member and questioned him about the Obamacare repeal plan.

For some members, the backlash from voters was a continuation from last month. When Republicans returned to their districts for a two-week Easter recess, opponents of the GOP’s efforts to dismantle the health care law flooded town halls and criticized lawmakers.

Craig Shirley, a historian and Ronald Reagan biographer, said Republicans need to be prepared to explain the health care bill to those in attendance and move “beyond just bashing Obamacare.”

“It’s up to the congressman to convince his constituents that the Trump bill, the House version, is a better bill than Obamacare, not a replacement, but improvement,” Shirley told The Daily Signal. “They need to convince the voters why the Republican version of pre-existing conditions is better. They have to go back and convince them that they’ll have basic coverage and show how premiums are going to go down and how deductibles are going to be improved.”

Shirley offered another piece of advice to GOP lawmakers holding town halls: charge for admission, and donate the proceeds to a local charity.

“Don’t make them free and open, because that’s an invitation for malcontent and trouble makers,” he said. “You will winnow out all the ultra-leftists, the anarchists, all the people who want to disrupt the town hall.”

While Republicans addressing voters this week are enduring criticism, GOP lawmakers are also getting cover from political groups on the airwaves at home.

The group is also offering air cover to Ryan specifically with a $500,000 national ad buy that started Monday.

The television ads are airing in Wisconsin’s 1st Congressional District, which the House speaker represents, and will also play during MSNBC’s “Morning Joe” and Fox News’ “Fox & Friends”—shows President Donald Trump is known to watch.

“It’s a bold plan to cut the deficit and provide $1 trillion of job-creating tax relief,” the ad says of the health care bill. “It puts patients and doctors back in charge of health care.”

“Thank Paul Ryan and House Republicans for keeping their word and fighting for the health care we deserve,” the ad concludes.

In addition to praising Republicans on the airwaves, American Action Network is providing further cover to congressional Republicans online.

The organization announced Wednesday a $250,000 digital ad campaign urging viewers to thank their members of Congress for supporting the House’s health care bill.

The campaign will run on Google, Facebook, and other online platforms, and targets 25 congressional districts.

Last month, the Club for Growth released its own ad praising MacArthur for his work on the health care bill. The television ad, which ran in the New Jersey Republican’s district, urged MacArthur’s constituents to thank him.

“Rebuilding his Congress works? Tom MacArthur is doing his part,” the ad stated. “Congressman MacArthur’s working with President Trump and conservatives on a reform plan that finally repeals and replaces Obamacare.”

Though Republicans are getting some backing from the Ryan-aligned group, pro-Obamacare organizations have launched their own campaigns that take aim at congressional Republicans who supported the Obamacare repeal plan.

Save My Care, a pro-Obamacare advocacy group, launched a television ad campaign exceeding $500,000 on Monday criticizing the health care bill. The ads target 24 GOP lawmakers who voted to repeal and replace the 2010 health care law, including Brat and MacArthur.

“Brat voted yes even though the bill makes coverage completely unaffordable to people with pre-existing conditions,” the ad states. “Congressman Brat, how could you do this to us?”

Republicans have been accused of gutting a provision of Obamacare that guarantees access to coverage for patients with pre-existing conditions through their health care bill.

The legislation passed by the House last week preserves that protection, but allows states to pursue a federal waiver from Obamacare’s community rating rules, which prohibit insurers from charging sick patients higher premiums.

Under the plan, only patients who live in states that are granted waivers and allow their coverage to lapse for more than 63 days would be subject to higher premiums. They can only be charged more for one year.

In states that decide not to pursue a waiver from the federal government, Obamacare’s provisions remain.