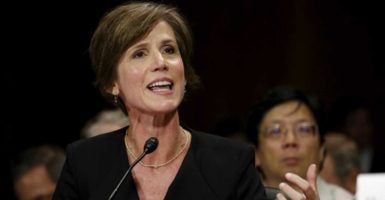 Conservative watchdog group Judicial Watch is suing the Justice Department for emails that could reveal what former acting Attorney General Sally Yates knew about alleged connections between Russia and the Trump administration.

Judicial Watch filed the lawsuit Friday under the Freedom of Information Act, Politico reported, when Yates already was scheduled to testify Monday before the Senate on alleged connections between President Donald Trump’s campaign and transition team and Russia.

Judicial Watch filed its initial request under the Freedom of Information Act for Yates’ emails roughly two weeks before The Washington Post first reported that the acting attorney general tried to warn the Trump administration about Flynn’s ties.

Trump said Yates may have leaked classified information to reporters, and suggested Monday that senators should ask her how the information ended up in the news media after her meeting with McGahn.

“Ask Sally Yates, under oath, if she knows how classified information got into the newspapers soon after she explained it to W.H. Counsel,” Trump tweeted Monday morning:

Ask Sally Yates, under oath, if she knows how classified information got into the newspapers soon after she explained it to W.H. Counsel.

Judicial Watch requested Yates’ emails from Jan. 20 to Jan. 31, her first days leading the Justice Department as acting attorney general. The agency did not decide whether to comply with the request by March 2, Judicial Watch claims in its lawsuit.

Yates was scheduled to testify at 2:30 p.m. EDT before the Senate Judiciary Committee’s subcommittee on crime and terrorism.

Content created by The Daily Caller News Foundation is available without charge to any eligible news publisher that can provide a large audience. For licensing opportunities for its original content, email [email protected].