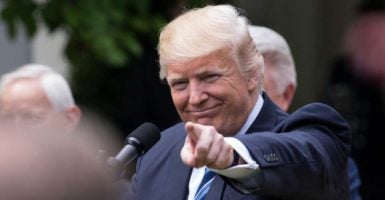 President Donald Trump, speaking Thursday at a National Day of Prayer event in the Rose Garden at the White House, announced he would travel to places identified with three of the world's major religions--Islam, Judaism, and Christianity. (Photo: Cheriss May/Zuma Press/Newscom)

President Donald Trump could be indicating his highest international priority in traveling to the Middle East ahead of European summits later this month, experts say, while also honoring three of the world’s major religions.

“[Trump] recognizes the importance of bringing all of our partners together,” @SHSanders45

Trump will travel to Saudi Arabia, then to Israel, and finally to Italy to visit the Vatican in Rome. This will be his first international trip as president.

The president announced the travel to centers of three major religions–Islam, Judaism, and Christianity–during a National Day of Prayer event Thursday in the Rose Garden of the White House.

The trip comes ahead news came ahead of already-scheduled travel to Brussels for the NATO summit May 25 and a Group of Seven, or G7, gathering May 27 in Sicily.

“President Trump has had this image of a great disruptor, but this shows he is a great restorer of our ties with our traditional allies,” Makovsky told The Daily Signal. “This is an important message after eight years of Obama. It reverberates globally by reassuring our traditional allies, who realize this is a good signal.”

Even with other problems abroad such as North Korea, the Trump administration is focusing much attention on the Middle East with challenges including the Islamic State terrorist army, the civil war in Syria, an emboldened Iran, and unstable countries such as Iraq and Libya.

“The Middle East is a big problem and he wants to do something to address it,” said Richard Benedetto, an adjunct professor in American University’s government department, adding:

It’s significant that Saudi Arabia is the first stop. They have been our second-closest ally [after Israel] in the Middle East and our closest Arab ally. Each president–Bill Clinton, George W. Bush, Barack Obama–has worked closely with the Saudis.

While in Saudi Arabia, Trump is scheduled to meet with leaders of the five other countries of the Gulf Cooperation Council, a political and economic alliance of Arab nations. They are Bahrain, Kuwait, Oman, Qatar, and the United Arab Emirates.

“He recognizes the importance of bringing all of our partners together, and certainly looking for ways that we can combat some of the greatest threats to all of the world,” White House spokeswoman Sarah Huckabee Sanders said of the president at a press briefing Thursday. “And that’s going to take some buy-in and some of the people in the Middle East taking a larger stake in that process, and I think that’s a big part of what we’re going to see on that trip.”

America needs the participation of four key countries for a coalition to help stabilize the Middle East and combat the Islamic State—Egypt, Israel, Jordan, and Saudi Arabia—said James Carafano, vice president for national security and foreign policy studies at The Heritage Foundation.

Trump already has visited with the leaders of Egypt, Israel, and Jordan at the White House. He is going to Saudi Arabia. He will handle the Middle East differently than his immediate predecessors, Obama and Bush, Carafano said.

“This trip will have a specific operational component, it’s not just for balance or checking off boxes,” Carafano told The Daily Signal, adding:

Trump met earlier in the past week with Palestinian Authority President Mahmoud Abbas, and frequently has talked about the Middle East peace process. However, showing commitment to a peace deal is as much strategy as it is a goal, Carafano said, explaining that it’s an important way to get Arab allies on board for other U.S. national security priorities.

The third destination, a visit with Pope Francis at the Vatican, might be a harmonious way to check a box after going to the holy cities of Islam and Judaism, Carafano said.

Still, considering the rhetorical clash the pope and Trump had during the 2016 campaign over immigration, Benedetto said, their meeting will have symbolic importance.

“Americans have always seen the pope as a world spiritual leader,” Benedetto said. “Trump’s executive order seemed to be a way of showing he cares for people of faith, and this meeting could show that moral leadership is important to him.”

Trump signed an executive order on religious freedom Thursday that directed the Internal Revenue Service not to target political speech by leaders of churches and other houses of worship. It also eased Obamacare-related regulatory burdens on religious organizations.

Bridging the gap could be worthwhile, said Craig Shirley, a presidential historian whose most recent book is  “Reagan Rising: The Decisive Years, 1976 to 1980.”