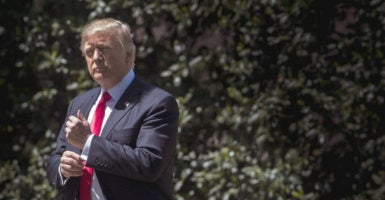 Until President Donald Trump officially withdraws the U.S. from the Paris Agreement, many of his core energy policies will remain subject to legal challenge. (Photo: Kevin Dietsch/UPI/Newscom)

On April 22, 2016, the United States and 170 other countries signed the Paris Agreement on Climate Change, which seeks “to combat climate change and adapt to its effects.”

This international measure commits signatories to shift their energy industries away from fossil fuels that cause “greenhouse gas” emissions, and toward renewal resources like wind and solar power.

Unfortunately, as documented by Heritage Foundation experts, U.S. enactment of regulations to meet benchmarks set by the Paris Accord would likely achieve only “symbolic” gains, while imposing huge costs to the U.S. in the form of fewer American jobs, lower family incomes, and reduced industrial efficiency.

In short, the Paris Agreement is bad for the American economy. What’s worse, the Obama administration’s decision to join it through a unilateral “executive agreement” not involving participation by Congress raised serious legal questions.

By withdrawing the United States from the agreement, President Donald Trump could achieve a win-win—advancing sound American economic policy in a manner that also strengthens respect for the rule of law.

What exactly does the Paris Agreement do?

It sets a target of limiting global warming to less than 2 degrees Celsius above pre-industrial levels by having the signatory governments commit to significantly reducing their global greenhouse gas emissions by “decarbonizing” their economies.

Currently, roughly 80 percent of America’s (and other countries’) energy needs are being met through carbon-based natural resources—mainly coal, natural gas, and oil.

Implementing U.S. regulations to conform to the Paris Agreement’s ideals, as proposed by the Obama administration, would cripple American carbon-based industries and drive up energy costs, harming American workers and consumers. 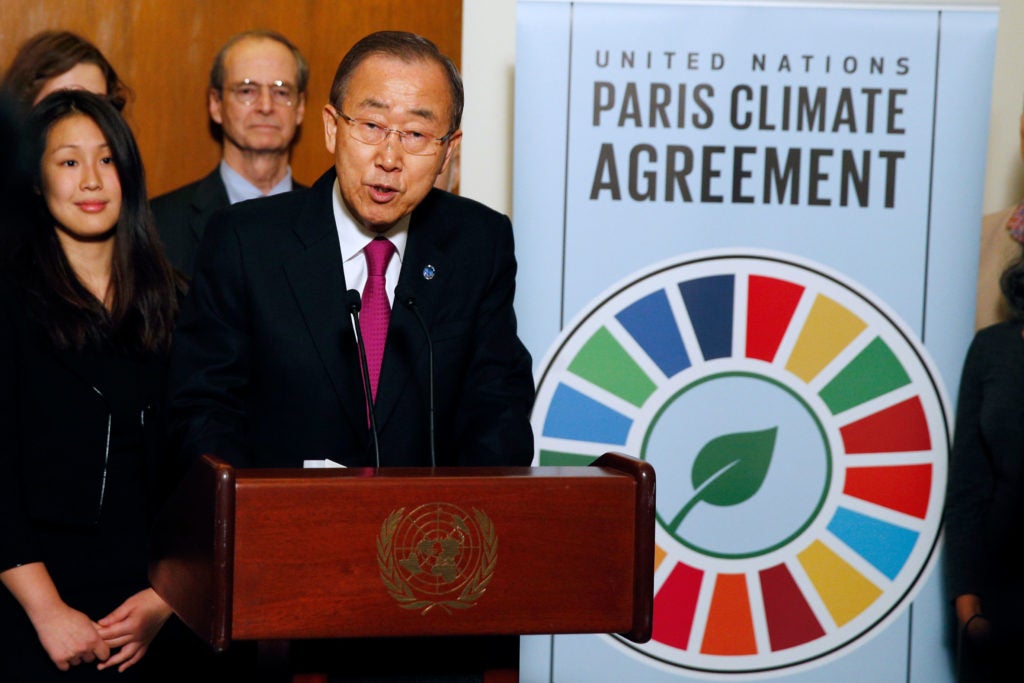 As Heritage Foundation economists have explained, this agreement’s effects on the U.S. economy and American quality of life would be staggering.

It would result in increased U.S. electricity expenditures of 15-20 percent over the next decade, 400,000 fewer American jobs, a total income loss of over $30,000 for an American family of four, and a loss of over $2.5 trillion in U.S. gross domestic product.

And all this would generate essentially zero environmental benefits.

Fortunately, the Trump administration is working to prevent these dire economic outcomes by undoing, or simply not enacting the crippling environmental regulations required by the Paris Agreement.

Of particular help was the president’s March 28 executive order, which requires executive agencies to: 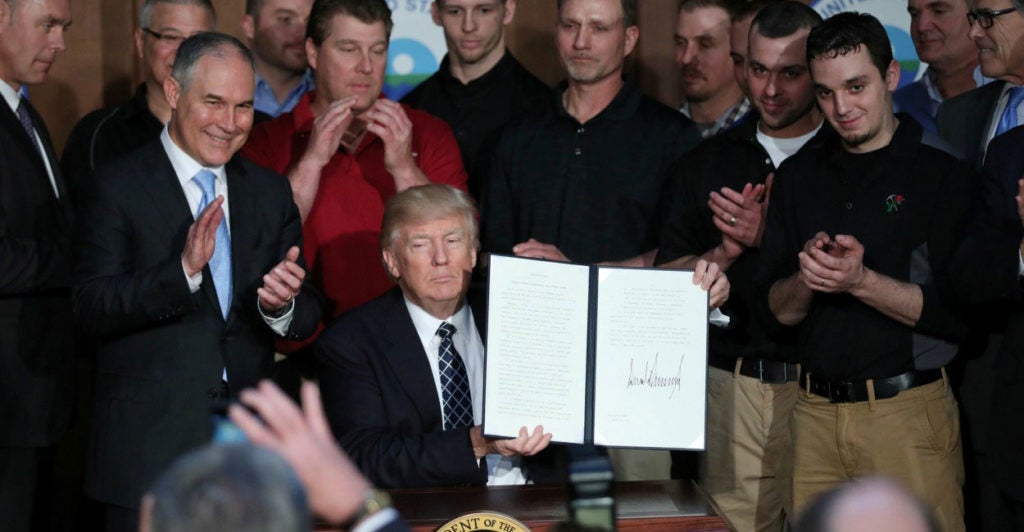 While this is an encouraging start, the president’s sounds regulatory policy will face potentially serious legal threats unless and until the United States officially withdraws from the Paris Agreement.

Why is this so?

Article 4.2 of the Paris Agreement requires each party to “prepare, communicate and maintain successive nationally determined contributions that it intends to achieve.”

The Obama administration submitted a nationally determined contribution providing that the U.S. would seek to reduce greenhouse gas emissions to 28 percent below 2005 levels by 2025.

A private party might now sue the government, claiming that the Trump administration’s environmental regulatory changes (including rescinding, changing, or failing to enact rules) violated this U.S. commitment.

Why? Because Article 4.11 of the agreement allows signatories to adjust a nationally determined contribution “with a view to enhancing its level of ambition, in accordance with guidance adopted by the Conference of the Parties serving as the meeting of the parties to this agreement.”

A plaintiff environmental group, for example, might argue that environmental regulatory relief would not “enhance” the Obama administration’s commitment. Rather, the plaintiff might claim that it would undercut that commitment, and therefore violate the Paris Agreement.

So is this realistic? As even environmental groups seem to recognize, such a suit would have no merit as a matter of well-settled federal law.

That is because the Paris Agreement’s provisions are not “self-executing”—they do not automatically create binding U.S. legal obligations and require the passage of congressional legislation to be made effective.

What’s more, as federal courts have held, it is presumed that a private party does not have “standing” to sue to enforce an international agreement absent specific language in the statute—and there is no such language in the Paris Agreement.

But that would not stop special interest groups from trying to sue. Recent experience shows that even meritless lawsuits challenging new Trump administration policies may succeed.

All that a plaintiff needs to do is find a federal lower court judge, and a favorable U.S. Court of Appeals, that is willing to ignore basic legal principles in order to further a desired policy objective, and the administration might be stopped dead in its tracks.

As Heritage Foundation legal scholar Hans von Spakovsky has explained, these unprincipled decisions reflect the fact that there are too many federal judges “who refuse to follow the law and the Constitution, and whose biases and personal views distort their decision-making.”

Accordingly, it cannot be ruled out that baseless challenges to environmental reforms invoking the Paris Agreement might initially (if not ultimately) succeed in some federal courthouse.

And even assuming they failed (as they should), such challenges would absorb scarce public resources and cause delay in implementing sound environmental policies, while creating unwarranted public confusion as to the international “legality” of the administration’s actions.

Furthermore, continued U.S. membership in the Paris Agreement might be cited as an extra public policy “plus factor” in challenges to environmental regulatory reforms, based on federal administrative law, rather than on the agreement.

Such a “plus factor” theory would have no basis in law, but it would further complicate defense of the administration’s actions.

Even aside from the short-term risk of litigation, continued U.S. membership in the Paris Agreement could be cited by some future president as justification for making a regulatory about-face and implementing new rules, which could cripple fossil fuel industries and harm the American economy.

All of these considerations form a strong case in favor of Trump withdrawing the United States from the Paris Agreement.

But U.S. participation in the Paris Agreement raises one final concern, one rooted in respect for the rule of law.

As detailed in the Heritage Guide to the Constitution, the scope of the president’s unilateral power to enter into an executive agreement without any participation from Congress “remains a serious question.”

Moreover, in light of past practice, the Paris Agreement has all the hallmarks of a treaty, such as targets and timetables. Thus, it should have been submitted to the Senate for ratification as a treaty.

>>> Read Steven Groves’ analysis, “The Paris Agreement Is a Treaty and Should Be Submitted to the Senate”

The Treaty Clause of the U.S. Constitution (Article II, Section 2, Clause 2) requires that two-thirds of senators consent to a proposed treaty. In bypassing the Senate and ignoring this requirement, President Barack Obama displayed contempt for the role of Congress and the democratic process in treaty making.

The president unquestionably has the right to terminate U.S. participation in the Paris Agreement on his own. Promptly exercising that right would benefit the American economy, while also promoting sound principles of law and constitutionalism.