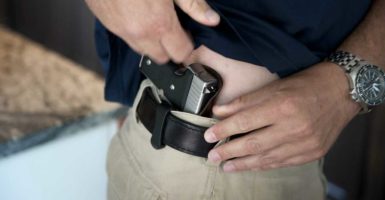 In the aftermath of the shootings, police discovered that the incident could have been much deadlier if it wasn't for the actions of a concealed carry permit holder. (Photo: Glen Stubbe/Zuma Press/Newscom)

Police in Texas say a concealed carry holder is a hero for shooting a crazed attacker Wednesday and preventing what could have been a slaughter inside a crowded sports bar.

The man, who was dining with his wife at Zona Caliente in Arlington, Texas, sprang into action when he saw a gunman shoot and kill the bar manager, police said. The man, who had a concealed carry permit, quickly shot the assailant, who later died.

The good Samaritan has not been publicly identified, but police identified the dead gunman as James Jones, 48, of Grand Prairie, Texas.

Police said the customer was carrying a handgun under the state’s concealed handgun license program.

Witnesses told police that Jones walked into the bar and began yelling incoherently. Jones shot and killed Cesar Perez, 37, the bar manager, after he tried to engage him in conversation to find out what he wanted. That’s when the armed diner drew his own weapon and shot Jones, police said.

“After he [Jones] was struck once, the suspect started shooting at the front door,” Cook told the Arlington Voice. “We know people were trying to escape, but we’re not sure if he was just trying to harm others.”

In the aftermath of the shootings, police discovered that the incident could have been much deadlier. Investigators found two more loaded guns and two knives on Jones’ body.

“We do believe he had the capacity to do much greater harm,” Cook said.

Cook confirmed that Zona Caliente is a so-called “blue sign” establishment that allows concealed carry holders to bring firearms inside.

He said the shooting will be referred to the Tarrant County grand jury—a standard procedure—but said he doesn’t expect the concealed carry holder to be charged with any crime.