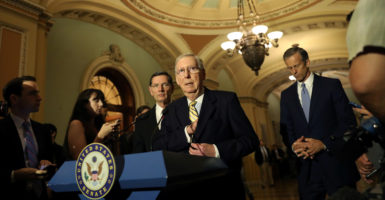 Senate Majority Leader Mitch McConnell, R-Ky., must shepherd a bill repealing and replacing Obamacare through the upper chamber. In the Senate, Republicans have to adhere to strict rules governing reconciliation, the budget tool GOP lawmakers are using to roll back the health care law. (Photo: Carlos Barria/Reuters/Newscom)

Republicans cleared a major hurdle on Thursday in advancing their proposal repealing and replacing Obamacare. But the House GOP’s health care bill is likely to see major changes in the Senate, where Republicans must contend with strict budget rules and slim margins to pass the legislation.

The House passed the American Health Care Act by a vote of 217-213 Thursday afternoon, capping weeks of negotiations that sought to satisfy conservative and centrist Republicans.

The bill repeals a number of Obamacare’s major provisions, including the individual and employer mandates, and replaces the law’s tax credits with age-based, refundable tax credits.

House leaders and the White House worked for weeks to get the health care bill through the lower chamber after conservatives and centrist Republicans came out against the original proposal.

The legislation that passed Thursday included amendments to address the concerns of both factions of the Republican party.

But though the health care plan was narrowly approved by the House, the bill could undergo a major makeover in the Senate.

There, a 12-member group of senators is drafting the Senate’s own proposal repealing and replacing Obamacare, which will include parts of the plan that passed the House.

“The safest thing to say is there will be a Senate bill, but it will look at what the House has done and see how much of that we can incorporate in a product that works for us in reconciliation,” Sen. Roy Blunt, R-Mo., said.

Republicans are using a budget tool called reconciliation to fast-track their Obamacare replacement plan through the Senate, where it will need 51 votes to pass.

Margins for Senate Majority Leader Mitch McConnell are slim, and already, several GOP senators have been skeptical of the House’s Obamacare repeal plan.

Sen. Susan Collins, R-Maine, criticized the bill in March and opposes efforts to defund Planned Parenthood. The legislation strips the organization of its federal funding for one year.

Additionally, four other Republican senators—Rob Portman of Ohio, Cory Gardner of Colorado, Lisa Murkowski of Alaska, and Shelley Moore Capito of West Virginia—expressed concerns about the bill’s plan for phasing out Obamacare’s Medicaid expansion in March.

Portman reaffirmed his opposition to the legislation Thursday.

“I’ve already made clear that I don’t support the House bill as currently constructed because I continue to have concerns that this bill does not do enough to protect Ohio’s Medicaid expansion population, especially those who are receiving treatment for heroin and prescription drug abuse,” the Ohio Republican said in a statement.

Conservatives, too, have their own concerns with the House’s Obamacare repeal plan.

Sen. Ted Cruz, R-Texas, emboldened his colleagues to “continue to improve the bill.”

“For many weeks, I have been working closely with my Senate colleagues, from across the ideological spectrum, on consensus reforms to make health insurance more affordable,” Sen. Ted Cruz, R-Texas, said in a statement. “We must deliver on that promise.

Conservative members of the Freedom Caucus are holding out hope that the upper chamber repeals more of Obamacare.

“Let’s be honest, when we sent an Obamacare repeal legislation to the Senate, it got better because we had folks like Mike Lee and Sen. [Ted] Cruz and Sen. [Marco] Rubio and Sen. [Rand] Paul and all these conservative senators who pushed the so-called reconciliation rules, who pushed the envelope and made it a slightly better piece of legislation,” Rep. Jim Jordan, R-Ohio, told The Daily Signal. “So we’re hoping that’ll happen again.”

In addition to addressing the concerns of Senate Republicans, GOP senators crafting their own bill must adhere to strict rules that govern the reconciliation process. Those rules ensure the tool is used only on bills that change taxes, spending, or the deficit.

Senators can challenge a provision of legislation by raising a point of order against “extraneous matter” included in the bill if he or she believes it violates the Byrd rule, named for the long-serving Democratic senator from West Virginia, Robert Byrd.

The Byrd rule outlines six tests to determine what constitutes “extraneous matter,” and some tests hold more weight than others.

If a senator objects to a part of a reconciliation bill, the Senate parliamentarian advises members on whether it meets the requirements or not. If the parliamentarian says a provision violates the Byrd rule, it may be removed from the bill, or it may be deemed fatal to the legislation.

House Speaker Paul Ryan said the House GOP’s health care bill was crafted to adhere to the rules of reconciliation.

But health policy experts warn that some provisions of that legislation could pose problems for Republicans in the Senate.

“I think the bill is ultimately going to have to be significantly rewritten to answer some of those concerns and hopefully takes it more toward something approaching an actual repeal of Obamacare,” Chris Jacobs, a senior health care policy expert at the Texas Public Policy Foundation and founder of Juniper Research Group, told The Daily Signal.

Jacobs has previously warned about pro-life protections included in the tax credits, which prevent the use of federal dollars to pay for most abortions, and the Senate parliamentarian has ruled in the past that those pro-life provisions violate the Byrd rule.

But removing the pro-life provisions for the tax credits could pose further problems for Republicans in both chambers.

“It raises the entire question of whether or not the tax credits remain politically viable because it will be taxpayer funding for plans to cover abortion, just like Obamacare,” Jacobs said.

Jacobs and other experts raised concerns about the fate of the House GOP’s original bill in the Senate several weeks ago. But since then, Republican leaders have added several amendments to the legislation, including one that allows states to pursue waivers to opt out of some Obamacare regulations and another that allocates money to states to set up programs to protect people with pre-existing conditions.

The Senate parliamentarian hasn’t yet ruled whether those amendments will pass muster in the upper chamber, but Jacobs said an analysis from the Congressional Budget Office would’ve provided some clarity.

Reconciliation bills can’t increase the deficit, and Jacobs said a “score” from the nonpartisan agency will detail the provision’s fiscal impact.

The House voted without an analysis from the Congressional Budget Office, which estimates how many people will lose or gain coverage and what the costs of the bill will be.

Though it’s unclear whether the waiver scheme created by the House GOP’s bill will withstand what’s called a “Byrd bath,” Jacobs said it would’ve been better for Republicans to repeal the regulations outright.

“I think a better solution is to repeal the regulations rather than having this waiver option of if you like your Obamacare, you can keep it,” he said.

This piece has been updated to reflect the day of the week the health care bill passed the House.