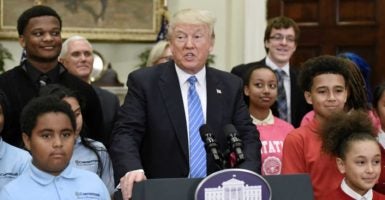 President Donald Trump signaled his support for education choice at a Wednesday event celebrating the achievements of charter school students and school voucher recipients in the nation’s capital.

It was an honor to be at this White House event to watch Trump, along with Vice President Mike Pence and Education Secretary Betsy DeVos, applaud the students who participate in the District of Columbia’s school choice programs.

School choice participants gathered in the Roosevelt Room of the White House, many of whom utilize the D.C. Opportunity Scholarship Program, or DCOSP, which provides scholarships to low-income children in the District of Columbia to attend a private school of choice.

The DCOSP has increased satisfaction among participating parents, and led to graduation rates 21 percentage points higher than non-scholarship students. Parents said they feel their children are safer in schools they have chosen, while moving toward the “center of their children’s academic development.”

“And this is what winning for young children and kids from all over the country looks like,” Trump said at the White House event.

The opportunity scholarship program that we’re funding allows families in the inner city of our nation’s capital to leave failing public schools and attend a private school, making an extraordinary difference in these incredible young lives … I’m deeply excited for the amazing things that lie ahead for these truly inspiring young Americans right here in Washington, D.C.

Pence said that Trump’s appearance was a surprise and demonstrated how proud the president is of the students’ achievements and school choice programs. He echoed Trump’s statements, noting that the DCOSP is “a case study in school choice success” and that its proposed reauthorization “is a victory for families and students throughout the District of Columbia.” “Since its creation in 2004,” Pence said, “the Opportunities Scholarship Program has given parents and families hope by giving them a pathway to take their children out of schools that too often are failing to meet the needs of children here in our nation’s capital, give them a chance that other families have to put their children into a private school.”

The event and support for the DCOSP is a welcome change of pace from President Barack Obama’s tenure, during which time funding for the scholarships was under constant threat of being defunded. Nearly every budget cycle, the Obama administration had attempted to zero-out funding for the program.

Supporting the DCOSP will provide education opportunities for thousands of children in the District.

The administration should also consider additional options that are appropriate through federal policy to create more choice for more American families. That includes school choice options for military-connected students, children attending Bureau of Indian Education schools, and an even greater expansion of choice in D.C. to include all children living in the city.

And the president should continue to provide rhetorical support to states, as more and more rightly continue the school choice march.