What’s at Stake in Trump Meeting With Palestinian Leader 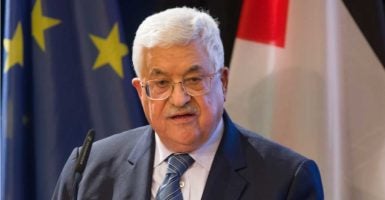 President Donald Trump will meet with the leader of the Palestinian Authority this week, ahead of his first trip to Israel expected later this month.

“The president’s ultimate goal is to establish peace in the region,” @PressSec says.

“The president’s ultimate goal is to establish peace in the region and so I think that’s obviously the goal and the discussion he’s going to have with the head of the Palestinian Authority,” White House press secretary Sean Spicer told The Daily Signal during the White House press briefing on Monday.

“That’s going to be a relationship he’s going to continue to work on and build with the ultimate goal that there is peace in that region between Israel and the Palestinian Authority,” Spicer added.

Still, considering the political problems Abbas is facing among his own people, experts have a mixed view on whether the visit will have any significance.

As a candidate, Trump pledged to relocate the Israeli Embassy from Tel Aviv to Jerusalem, a move that could spark rage among Palestinians.

The Daily Signal asked Monday if Trump will talk about moving the embassy during his Wednesday meeting with Abbas.

“That is still being discussed by staff,” Spicer told The Daily Signal.

In an interview last week, Trump told Reuters, “ask me in a month on that,” about moving the embassy to Jerusalem.

The meeting presents a major opportunity for Abbas, said Robert Danin, a senior fellow for Middle East studies at the Council on Foreign Relations.

“President Trump is not interested in peace process or in negotiations for negotiations’ sake. He is interested in a deal,” Danin told The Daily Signal in a phone interview. “There are a lot of questions about Abbas and his political standing. He has to convince the president that he can close the deal. It’s a big challenge, but it’s also a tremendous opportunity.”

Trump met with Israeli Prime Minister Benjamin Netanyahu in February. During a joint press conference with the two leaders, Trump predicted a “bigger and better” Middle East peace deal than anyone expects. He asked Israel to hold back on settlements, and said he is open to a two-state solution or one-state solution, whichever is more likely to bring peace.

Trump has said that his son-in-law and senior adviser, Jared Kushner, would be in charge of reaching a peace deal.

Danin added that Trump could be in a stronger position than previous presidents, and could even put pressure on Israel that President Barack Obama couldn’t.

“The people of Israel believe Trump is on their side,” Danin said. “President Trump doesn’t believe settlements and settlers are bad guys. He believes the settlements are part of the answer, but he hasn’t demonized the settlers as President Obama did. They believe he wants to move the embassy to Jerusalem, no matter what he does.”

At this stage, Abbas has little influence as a leader, said Jim Phillips, a senior research fellow for Middle Eastern affairs with The Heritage Foundation.

“I think the Abbas visit will yield little results. Abbas is unwilling and unable to reach a comprehensive peace agreement with Israel on acceptable terms,” Phillips told The Daily Signal.

Abbas, 82, is facing a tough political climate at home. Though his term was supposed to expire in 2009, he remained in power without an election nor designated successor. His party, Fatah, is also divided.

“He has no control over Hamas, which is virulently opposed to Israel’s existence, let alone negotiations, and it would torpedo any final accord he would sign,” Phillips said. “Even many of his own supporters within Fatah have abandoned him. He is yesterday’s man and is increasingly irrelevant to what happens tomorrow.”

Trump did the right thing in reaching out to Abbas for a meeting, said Clare Lopez, vice president for research and analysis at the Center for Security Policy, a conservative foreign policy think tank in the District of Columbia. However, she said no one should expect a breakthrough on a peace deal.

“I’m not exactly sure why the U.S. keeps trying. Every time, the Palestinians were offered a deal, a good deal, under President [Bill] Clinton, under President [George W.] Bush, they walked away,” Lopez told The Daily Signal. “Whether it’s Hamas in Gaza or Fatah in the West Bank, this is Islam, it’s not political.”

Lopez said that any Palestinian leader who wanted to recognize Israel’s right to exist would be marginalized, accused of apostasy, and likely to face threats to his life.