We Hear You: ‘No More Reasons Why Congress Can’t Totally Repeal Obamacare’ 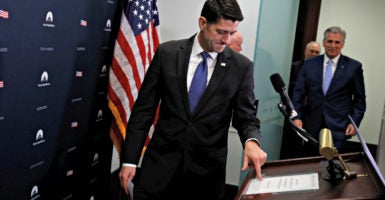 Editor’s note: Republicans’ failure to repeal Obamacare after assuming control of the White House as well as Congress registered strongly with our audience in recent days. The day after President Trump’s 100th day in office, today’s mailbag leads off with two related letters, one signed by 17 GOP and grassroots activists in Pennsylvania.—Ken McIntyre

Dear Daily Signal: Since it was enacted into law in 2010, most Americans have opposed the Affordable Care Act, aka Obamacare. In elections since then, Republicans have campaigned on the promise of total repeal of Obamacare. We, political constituents and grassroots supporters, responded by giving Republicans the House, then the Senate, and, in 2016, the presidency.

There are no more reasons why Congress cannot totally repeal Obamacare (“What’s in the New Obamacare Deal That Could Unite Conservatives, Centrists”).

The new American Health Care Act, as it stands now, is not Obamacare repeal.  Most Americans agree, given that only 17 percent support the bill, according to a recent Quinnipiac poll.

We ask nothing more than our legislators honor their campaign promises to repeal Obamacare.

Repeal means dismantling the Title I regulatory structure in the legislation that has caused insurance premiums to skyrocket, swelled Medicaid rolls and inserted the federal government between patients and our doctors.  The 2015 repeal bill, which passed both the House and Senate, is a starting point for repealing Obamacare.

The House Freedom Caucus is not the problem. They are attempting to honor what the Republican Party has promised its supporters since 2010.

We, the undersigned, represent local grassroots groups whose members are your readers. We now ask that promises to us are honored: Congress must repeal Obamacare, then replace it. No more excuses.—Betty Dunkel-Hernon, for Valley Forge Patriots Republican Committee, Schuylkill Township, Pa.

Editor’s note: The above letter arrived April 24, before House conservatives announced support for new revisions of the health care bill.

Dear Daily Signal: I don’t understand why this Republican Party is so completely unable to understand what it is Americans are asking for (“Health Care Talks Continue as Republicans Face Questions on Obamacare Repeal”). You can forward my frustrations:

I am a taxpayer with a lifelong chronic medical condition, Crohn’s disease, and I work in the medical field. You’d think I’d be ecstatic to have Obamacare, except that I’ve grown up having private insurance and for a brief time in young adulthood I was on disability/SSI. I’ve had to sacrifice and struggle to have insurance coverage all my life.

So let me make this clear: The worst year of my life, bar none, in terms of dealing with this disease, insurance, etc., was the year I was prostrate to the federal government for my support. I vowed, never again.

Government does nothing efficiently or well. I’m sorry to burst the bubbles of our hard-working, dedicated Congress, but they cannot make anything at all work economically. At all.

Congress should repeal Obamacare completely. Why can’t Congress just set the rules, and then just let the free market solve the coverage issues by itself? Why not just let insurers offer coverage anywhere, without restrictions to certain states, and then get out of the way?

Check your (huge) egos, Congress! Let health care be handled by people who know how to manage money and who know something, anything, about health care and health insurance. Please, I’m begging you: Get out of health care.—Galen Jackson

Republicans Shrink From the Budget Battle

Dear Daily Signal: I am a very conservative person who reads a lot about current events online across seven to 10 different websites, excluding “mainstream media” sites. I read Genevieve Woods’ commentary on congressional Republicans and couldn’t agree with her more (“Even With Republicans in Charge, Upcoming Budget Battle Looks Grim”).

The GOP is a bunch of spineless wimps who are continually outplayed by the bully “illiberals.” The GOP doesn’t seem to have learned any lessons on strategy from the Harry Reid/Barack Obama years.

The lessons: Get out in front of it, stick disliked legislation in a drawer someplace and forget about it. Do not put anything forward that the president will veto. Finally, when all else fails, threaten the GOP, and if that doesn’t work, threaten them some more. Why isn’t the GOP following the Democrats’ model?

I particularly like Ms. Woods’ following recommendations, quoting from her commentary:

They should be calling the Democrats’ bluff and put forward legislation that does what they promised—reins in government spending, starts addressing America’s debt, and secures our border and national security needs.

If enough Democrats in the House and Senate don’t vote for it (such legislation requires 60 votes in the Senate), they should make it clear that they will go into every state where vulnerable Democrats are up for re-election in 2018 and tell voters there that their lawmaker was responsible for shutting down the government over liberal pet causes—such as funding for sanctuary cities and Planned Parenthood—or because he or she didn’t want to allocate funds to secure our border.

As a result of reading so much about current events, I am definitely of the opinion that Senate Majority Leader Mitch McConnell has been around too long and needs to be gone.

He doesn’t appear to be strong enough nor clever enough to lead the GOP and Senate to victory on important issues for this country. The budget and debt ceiling are two of the really important ones.—Tracy Gore, Vancouver, Wash.

The Best Thing Trump Has Done for the Country

Dear Daily Signal: Morgan Walker’s article regarding reporters participating in White House briefings via Skype is excellent (“This 1 Change Trump Administration Made to White House Press Briefings Is Shaking Up the Media”). Finally, a great example of a positive spin on political news coverage.

The goal of the “mainstream media” has always been to manipulate and control the way the public thinks. It could be the most powerful force for good on the planet. Unfortunately, it runs in the opposite direction, and is clearly the greatest threat to the Trump administration and democracy in our country.

Isn’t it ironic that the media is missing such an incredible opportunity?

Love him or hate him, perhaps the best thing President Trump has done for the country is to finally expose the biased and corrupt mainstream media for what it really is. The “swamp,” our incredibly stupid and inept Congress, is a close second.

Please share with Ms. Walker. Also, kudos to Fred Lucas and others for continuing to investigate the George Soros conspiracy to cripple the USA from within. Glad to be a member of The Heritage Foundation.—Hank Mattox

Trustworthy news sources are a rare commodity across America for everyone, but especially for conservatives. Someone with the resources of the Koch brothers could create a nationwide news brand on their own.

But in lieu of that, it would be helpful to have a branding device that conservatives could use to validate online media, and possibly also print and broadcast media, as reliable and accurate. Not in the sense of dogma, but rather accurate and true by professional journalism standards.

If you think this idea is worthy of consideration, please contact your worthy peer groups for possible action.—Newell S. Jones

Dear Daily Signal: Having once had a mainstream media job, I prefer to remain anonymous here. Read the last paragraph of this recent New York Times ad for “a new Rio de Janeiro bureau chief, one of the most exciting and dynamic assignments in the world,” including coverage of both Brazil and Argentina:

The New York Times is an Equal Opportunity Employer and does not discriminate on the basis of an individual’s sex, age, race, color, creed, national origin, alienage, religion, marital status, pregnancy, sexual orientation or affectional preference, gender identity and expression, disability, genetic trait or predisposition, carrier status, citizenship, veteran or military status and other personal characteristics protected by law. All applications will receive consideration for employment without regard to legally protected characteristics.

But would The New York Times hire a Trump voter? Or do they rule out 50 percent of the U.S. population?—A Reader

Dear Daily Signal: I was very disappointed in the lead letter in your recent “We Hear You” roundup (“I’m a Sailor, a Marine, and a Transgender Woman Who Was Born This Way”). In all honesty, if we allow human beings to determine what’s acceptable in American society, we might as well neuter the Constitution because it only can be read through the eyes of biblical understanding.

John Adams stated: “Our Constitution was made only for a moral and religious People. It is wholly inadequate to the government of any other.”

What I am saying here is not my opinion or prejudice. This is historical precedent, as well as legal precedent. This is not right-wing rhetoric from the lunatic fringe. This is legal and historical fact.

By the way, The Daily Signal is wonderful. Better than reading all of the other “rags” out there. If you want good success, maintain honesty and integrity. It will reflect well on The Heritage Foundation, which has always been a refuge for honesty and truth.—Bobby G., Woodstock, Ga.

Dear Daily Signal: Regarding Mike Gonzalez’s commentary (“There Is Time to Reverse Obama Census Proposal That Promotes Group Identity Politics”), national or regional origin and ethnicity does not constitute racial origin. It should not be used to determine the population mix in the USA.

Skin color is irrelevant. We all should strive to be Americans and determine our race according to the basic four: black, Caucasian, Native American, Far Eastern/Oriental.—Cone S. Underwood

You are doing very well. I look forward to each new edition. Keep up the good work. And thanks.—Bill Williams

The border wall needs to be started and the national debt reversed. Still top of list.—Vtext

I’m a big fan and daily reader of The Daily Signal. I was wondering if someone could write an article analyzing why all the Earth Day/March for Science hoopla didn’t include any outrage for the lack of the “scientific method.” It was a rigorous standard for science in the past hundreds of years, but now isn’t being followed 99 percent of the time.—Darren Richardson

Keep up the good work.—Ed Phillips

Receiving The Daily Signal keeps me up with what is going on, not only in the U.S. but all over the world. And that, I really appreciate. The commentary is good and accurate, which is not offered on too many websites. Thanks for all the good you are doing.—Howard Shoemaker