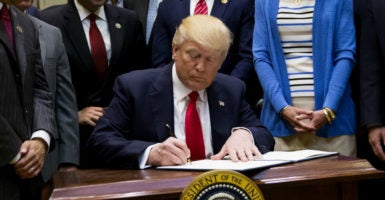 For decades, bad policies have blocked access to America’s abundance of domestic resources, yet America has still managed to be a global energy leader. Trump’s executive order, “Implementing an America-First Offshore Energy Strategy,” could unleash further success in the energy sector.

The economic potential sitting just off America’s coasts is enormous. The Outer Continental Shelf is awash with natural resources, containing an estimated 86 billion barrels of oil and 420 trillion cubic feet of natural gas.

Realizing that potential could create nearly a million American jobs, and the increased energy supplies that would result would put money back into the bank accounts of American families. It would also generate new prospects for investment and job creation, as cheap energy lowers the cost of business operations across all sectors, not just energy.

The federal government has placed various bans on offshore drilling for decades. Last November, the Obama administration’s Department of Interior finalized some of the most restrictive leasing programs to date.

The Interior Department’s final 2017-2022 Outer Continental Shelf Oil and Gas Leasing Program was best known for the areas it placed off limits, rather than what it made available to lease for energy exploration.

It excluded lease sales in the oil-rich Beaufort or Chukchi seas off the coasts of Alaska, as well as areas off the Atlantic and Pacific coasts. The Interior Department also restricted opportunities in the Gulf of Mexico and the Cook Inlet off south central Alaska.

Critics of Trump’s decision to free up leasing are making the same arguments they’ve made for years: “Oil prices are too low, so the decision won’t spur more oil exploration. Drilling offshore takes too long, so it’s not going to have any immediate impact.”

But those arguments ignore the biggest drivers of investment. Juliet Eilperin and Brady Dennis were spot on in writing for The Washington Post, “[L]ocal political considerations and the global energy market are likely to influence future exploration far more than an executive order in Washington.”

While Trump’s executive order will open more doors for exploration, it won’t automatically trigger an energy boom. That’s the way it should be.

Oil prices are long-term and, as history has shown, can increase rather quickly. Industry makes investment decisions looking decades into the future, not simply based on short-term projections.

Although it certainly is possible that low oil prices could prohibit offshore production, that’s a decision for the private sector to consider. Businesses are much better equipped and flexible to deal with changing economic circumstances than shortsighted politicians in Washington.

Another battle cry for of those who oppose offshore drilling is: Do we really want to risk another Deepwater Horizon spill?

The Deepwater Horizon spill of 2010, which caused environmental degradation in the Gulf of Mexico, was a rare and isolated incident, not a result of any systemic problem associated with offshore oil and gas operations.

That’s not to say flaws don’t exist in the current system or that improvements can’t be made.

Current law states that oil or gas companies do not have to pay more than $75 million in liability costs for accidents they cause—no matter how great the damages.

Additional fees can be paid out of a government-mandated trust fund (the Oil Spill Liability Trust Fund), which effectively socializes the risk of offshore oil and gas activities.

Congress should reform the Oil Spill Liability Trust Fund and remove the $75 million liability cap, replacing it with a new system that assesses the risks of offshore oil and gas operations and appropriately assigns those risks to industry operators.

A new approach would accurately assign risk to all offshore operations, including exploratory drilling, production, and tanker movements.

Such a system should also hold operators fully liable for their actions and guard against frivolous lawsuits. It should rely on market-based mechanisms and be built around private insurers and professional risk assessors. Environmental activists aren’t the only ones opposed to Trump’s executive order. Some members of the tourism industry have also voiced concerns about expanded drilling off the Atlantic.

But the energy industry has worked in perfect harmony with other industries. Just look to the Gulf Coast. Every year, residents of the Gulf come to Morgan City, Louisiana, to celebrate the lifeblood of the region’s economy: seafood and oil.

Morgan City’s Shrimp and Petroleum Festival emphasizes “the unique way in which these two seemingly different industries work hand-in-hand culturally and environmentally in this area of the ‘Cajun Coast.’”

While the Deepwater Horizon spill affected all industries in the Gulf Coast, the majority of seafood and tourism companies supported the oil industry throughout the ordeal.

In fact, in many respects, the spill has strengthened the bond between the oil and seafood industry. Shrimpers and fishers were as vocal as anyone in lifting the offshore drilling ban after the spill.

Drilling off the Atlantic coasts could welcome the same symbiotic relationship, which already exists in the Gulf and in the state of Alaska.

Currently, states receive 50 percent of the revenues generated by onshore oil and natural gas production on federal lands, and Congress should apply this allocation offshore as well.

Drilling off states’ coasts and allowing them a larger share of the royalty revenue would encourage more state involvement in drilling decisions.

Offshore drilling would also promote state and local government participation in allocating funds, helping them to close their deficits, enabling coastal restoration and conservation, and shoring up funds for schools.

Trump’s executive order is a welcome step to increasing access to domestic resources, but the back-and-forth of banning resource exploration and then undoing it is a sign that wholesale reform is necessary.

The politicization of the leasing program and the static central planning process that has stifled a dynamic, constantly changing energy market points to the need for legislative action. It is time for a fundamental reconsideration of how the U.S. manages offshore resource development.

Congress should amend the Outer Continental Shelf Leasing Act and get rid of this antiquated, piecemeal leasing approach.