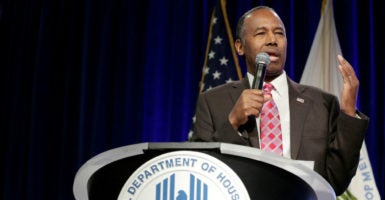 Citing safety for women, 40 leaders of groups across the country have signed a letter asking Housing and Urban Development Secretary Ben Carson to rescind and revise a gender identity rule adopted by the Obama administration for government shelters.

The rule, published in September 2016, allows all individuals to use HUD men’s and women’s shelters based on their gender identity, regardless of whether they were born male or female.

“Dear Mr. Secretary,” the letter to Carson reads, “We write to urge you to … protect the safety and privacy of women in need of shelter due to homelessness or violence.”

We are a diverse group of women and organizations allied in a common cause: mothers, feminists, women of faith, lesbian and bisexual women’s rights activists, and concerned neighbors, convened through the Hands Across the Aisle Coalition, to request your consideration for our sisters without stable housing.

The HUD-run shelters, services, and programs covered by the rule are for men and women who are homeless, or about to be so, and for women fleeing domestic violence.

The letter is the work of the Hands Across the Aisle Coalition, a group of conservative and liberal women who work to fight what they consider anti-woman positions promoted by the transgender movement.

The coalition planned to submit the letter to HUD on Monday.

The rule’s formal title is “Equal Access in Accordance with an Individual’s Gender Identity in Community Planning and Development Programs.”

Nonbinary refers to a “combination of both male and female, or neither, or in between,” Ryan T. Anderson, a senior research fellow at The Heritage Foundation who writes on gender identity issues, told The Daily Signal in an email.

The Daily Signal’s Kelsey Harkness previously produced a video about the Hands Across the Aisle Coalition:

Kristen Bridgan-Brown, 42, a mother and a victim of rape and abuse from Tacoma, Washington, stayed at a shelter for women during her recovery.

She says this is a personal issue for her.

“A man’s presence would have been a complete deal breaker,” Bridgan-Brown said in a statement provided to The Daily Signal. “I would have left. In my mind, my known abuser would have been better to go back to, than someone who had the potential to hurt me that I didn’t know.”

During her time at the Family Renewal Shelter in Tacoma, Bridgan-Brown said, she shared restroom facilities, a kitchen, a living room, a dining room, and a laundry room with other women and their children. She said it was important that she shared those facilities with her own gender.

“Women from domestic violence relationships need a safe space away from men to regroup and process,” Bridgan-Brown told The Daily Signal. “It takes years to heal, but it’s the necessary start of a long journey.”

Autumn Leva, director of policy and communication for the Family Policy Alliance, an organization that seeks to protect religious freedom and family values, said the Trump administration must change the government rule.

“This rule defies common sense, defeats the very purpose of women-only shelters for victims of abuse, and threatens the safety and dignity of women in need of HUD facilities,” Leva said in a statement provided to The Daily Signal.

Over 1 million people are served each year in HUD’s housing program for the homeless, according to the agency.

CitizenGO, an organization that seeks to “defend and promote life, family, and liberty,” hosts a Hands Across the Aisle Coalition petition asking that Carson change the rule.

“For most of us, this isn’t even a hard issue,” Joseph Backholm, president of the Family Policy Institute of Washington, which promotes traditional family values and opposes the rule, said in an email to The Daily Signal, adding:

Those who find themselves in need of a women and children’s shelter are often escaping dangerous and abusive situations. I don’t have the nerve to tell them they don’t have the right to be concerned about sharing a room with a complete stranger who is a biological male and I don’t think the federal government should either.

The Human Rights Campaign, a major advocate for lesbian, gay, bisexual, and transgender Americans, and the Center for American Progress, a think tank that advances LGBT activists’ goals, did not respond to The Daily Signal’s requests for comments on the Obama administration’s gender identity rule for HUD shelters.

“The fact that [women] could be faced with sharing these facilities with men who seek to exploit these ‘gender-fluid’ guidelines as an opportunity to prey on these women is unthinkable and wholly unacceptable,” Hodges said.

Matt Sharp, senior counsel at Alliance Defending Freedom, told The Daily Signal that under HUD’s rulemaking process, officials could write a rule restoring the original language and ask for public comment before adopting it.

The rule potentially could be rescinded by Congress using the Congressional Review Act, Paul Larkin, a senior legal fellow at The Heritage Foundation, told The Daily Signal in an email.