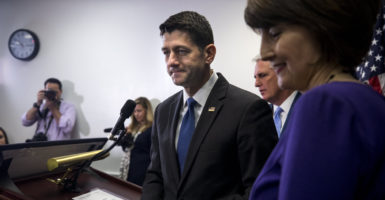 For Republicans in Congress, the path to repealing and replacing Obamacare could be made more difficult by less conservative members who say a revised proposal would cause health insurance premiums to swell for sick patients.

GOP leaders were prepared to put a bill dismantling the health care law before lawmakers for a vote by Saturday, President Donald Trump’s 100th day in Congress.

But some Republicans remain wary of the new proposal, with as many as 27 lawmakers opposed to or leaning against the bill, according to The Huffington Post.

Republican leaders are working to persuade the centrist flank of the conference to back the amended proposal, called the American Health Care Act.

Republicans’ efforts to pass a bill repealing and replacing Obamacare were revived earlier this week after two leaders from the party’s centrist and conservative wings released a compromise amendment.

The amendment, crafted by Tuesday Group Co-chairman Tom MacArthur, R-N.J., and House Freedom Caucus Chairman Mark Meadows, R-N.C., would give states the option to pursue waivers to opt out of Obamacare’s regulations.

Conservatives pointed to the regulations—specifically one that mandated the services plans have to cover and a second that prevented insurers from charging sick customers more—as the reason for rising health insurance premiums.

The so-called MacArthur amendment aimed to unite Republican lawmakers behind the bill.

And indeed, the revision swayed some conservatives who initially opposed the legislation.

On Wednesday, the conservative Freedom Caucus announced its support for the revised health care bill, called the American Health Care Act. For the group to take an official position on legislation, 80 percent of its members must be in agreement.

But for some Freedom Caucus members, the revised bill still fell short of full repeal.

In a statement Thursday announcing his opposition to the legislation, Rep. Andy Biggs, R-Ariz., said support for it would mean breaking his promise to constituents to repeal Obamacare in full.

“Let’s be honest, this bill will never be a full repeal,” Biggs told The Daily Signal. “It never keeps our promise.”

Instead, the freshman lawmaker said, the waiver process created by the amendment indicated that Obamacare was left in place.

To win his support, the Arizona Republican said, the waiver process would need to be changed. Under Biggs’ preferred plan, states would need to notify the government that they have chosen to opt out of Obamacare’s essential health benefits requirement and community ratings rules.

Biggs also said he would like to see the legislation allow for the sale of insurance across state lines—a reform Trump repeatedly backed on the campaign trail.

“Those two things there would drive prices down and simulate, to some extent, a repeal,” he said.

“It threatens to send premiums skyrocketing for people with pre-existing conditions,” Meehan said in a statement. “It will make coverage more expensive for older Americans as they near retirement. And it threatens essential health care benefits like doctor’s office visits, opioid addiction treatment, and emergency room care.”

Others, including Rep. Mario Diaz-Balart, R-Fla., say they are undecided. Diaz-Balart told reporters Thursday the revised proposal has “lots of red flags.”

“I’m trying to figure out how this makes the legislation better,” he said.

The Florida Republican supported the original health care bill when it was before the House Budget Committee last month.

After the Freedom Caucus announced its support for the revised legislation, many influential conservative groups followed suit, including Heritage Action for America, Club for Growth, and FreedomWorks.

With the new momentum, the White House began pushing for a vote on the bill Friday or Saturday—which would hand Trump a legislative victory by April 29, his 100th day in office.

House Majority Leader Kevin McCarthy, R-Calif., told reporters the House would not vote on the health care bill Friday or Saturday, but said Friday leaders would bring the bill before lawmakers for a vote “as soon as possible.”

Though the House is inching closer to a vote on the health care measure, it’s unclear how long it will be before a bill repealing and replacing Obamacare lands on Trump’s desk.

House Speaker Paul Ryan said the original measure was crafted to comply with the Senate’s rules of reconciliation, the fast-track budget process Republicans are using to pass the bill.

But Senate Minority Leader Chuck Schumer, D-N.Y., says he believes the MacArthur amendment would violate those rules, which would make the bill subject to a 60-vote threshold.

“Once again, House Republicans have made their bill worse for the health of the American people in order to buy off the Freedom Caucus and other conservatives,” Matt House, Schumer’s spokesman, told the Washington Examiner. “But once again, that effort is almost certainly going to run afoul of Senate reconciliation rules, ensuring that the bill with these provisions will need 60 votes to pass.”

Still, a House vote on the health care bill could come next week.

But Biggs warned that at this point, it’s unlikely Republicans will be able to pass a plan to mitigate premium hikes for 2018, since insurance companies are already in the initial stages of planning for next year.

For Republicans, that could make the 2018 midterm elections tricky, the Arizona Republican said.

“2018 becomes suddenly a very difficult year for Republicans to hold on to the House and Senate,” Biggs said. “I think all of us are in a tight spot.”