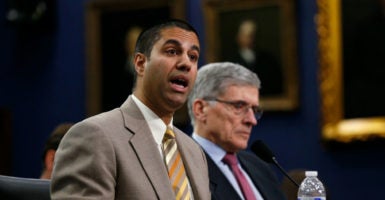 The narrative dominating the media this week has been the success or failure of President Donald Trump’s first 100 days.

But at the Federal Communications Commission, there is no question that change is afoot.

The 2015 rules deemed internet service providers such as Verizon and Comcast to be “common carriers” under the 80-year-old Communications Act.

This allowed the FCC to subject those companies to meticulous FCC control over how they provide service—specifically, net neutrality rules requiring providers to treat all internet transmissions equally, even if the sender or consumer would prefer customized service.

But Wednesday, the FCC chairman revealed plans to repeal the 2015 Open Internet Order and return to what he described as “the light-touch regulatory framework that served our nation so well.”

The repeal process is a political minefield, but the chairman’s success would be a significant victory for free enterprise. Innovation and consumer choice would be enhanced, as would high-speed access for millions more Americans.

It’s basic economics. The more heavily you regulate something, the less of it you’re likely to get. … Sure enough, infrastructure investment declined. … [d]omestic broadband capital expenditures decreased by 5.6 percent, or $3.6 billion … It is the first time that such investment has declined outside of a recession in the internet era.

The deregulation proposal is being released Thursday, and the public will be able to submit comments to the commission—unlike in 2015, when the FCC adopted the 313-page order without public review.

The plan is to vote at the FCC’s May meeting on adopting the notice of proposed rulemaking. Presuming that moves forward, the commission would vote at its September meeting to rescind the 2015 order.

Whether this occurs on Day 99 or 101 of the Trump administration doesn’t make much difference. The FCC chairman’s proposal is a direct strike against the unparalleled regulatory overreach that ran rampant for the previous eight years. Bravo.