Congress Asked to Eliminate $270 Million a Year in Solar Subsidies 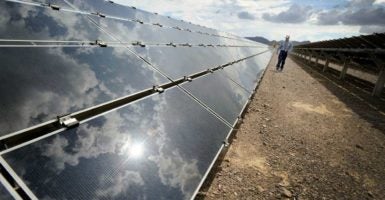 Conservative groups have asked lawmakers on the House Appropriations Committee to eliminate a solar subsidy program worth $270 million.

The letter calls SunShot the “ground zero of the solar subsidy machine,” arguing that it gives out millions of dollars in subsidies through net-metering programs. Such programs force utilities to buy the electricity from rooftop solar panels at up to six times the market price, effectively forcing non-solar residents to pay more to maintain the grid.

“Net metering threatens the stability of electricity grids by depriving them of necessary investment,” William Yeatman, an energy and environmental policy researcher at the Competitive Enterprise Institute, told The Daily Caller News Foundation.

Conservative groups signing the letter included the Competitive Enterprise Institute, the Taxpayers Protection Alliance, the National Taxpayers Union, Americans for Tax Reform, Council for Citizens Against Government Waste, the American Energy Alliance, Americans for Prosperity, and the Consumers Alliance for a Strong Economy.

SunShot funds many of the states that have enacted net-metering policies for homeowners with solar panels. Solar companies and environmentalists have pushed these policies as a way to encourage solar power and fight global warming, but utilities argue net metering shifts the costs of maintaining the electrical grid on to households that don’t have solar panels.

Researchers have found that expanding net metering or maintaining it for long periods of time will drive up power prices. Without government support from net metering, solar energy is nonviable, according to a 2015 study by the Massachusetts Institute of Technology.

“Under net-metering regimes, owners of rooftop solar panel installations gain from the sale of the electricity they produce,” Yeatman said. “However, they don’t contribute to upkeep of the physical infrastructure of electricity transmission and distribution.”

“That is, beneficiaries of net-metering programs don’t contribute to the maintenance of the grid, which makes their ‘benefit’ possible to begin with,” Yeatman said. “The unfortunate ‘solution’ to the investment imbalance created by net metering is to charge all ratepayers more, in order to compensate for what the rooftop solar panel owners are not contributing.”

Net metering increases electricity prices for American families and redistributes money from poorer individuals who don’t own solar panels to richer ones who do, according to a study by the free market Institute for Energy Research.