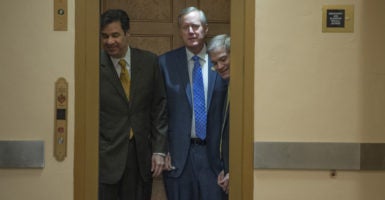 Republican leaders in the House received a boost to their attempts to repeal and replace Obamacare on Wednesday as the Freedom Caucus, an influential bloc of conservatives, announced its support for a revised plan.

The group of more than 30 lawmakers said it would support a new version of the bill, called the American Health Care Act. The revision includes an amendment crafted by Freedom Caucus Chairman Mark Meadows, R-N.C., and Tuesday Group Co-chairman Tom MacArthur, R-N.J.

“The MacArthur amendment will grant states the ability to repeal cost-driving aspects of Obamacare left in place under the original [American Health Care Act],” the Freedom Caucus said in a statement. “While the revised version still does not fully repeal Obamacare, we are prepared to support it to keep our promise to the American people to lower health care costs.”

For the Freedom Caucus to take an official position on legislation, its rules call for 80 percent of members to agree.

The culmination of weeks of negotiations between Meadows and MacArthur, the compromise amendment aims to unite the House’s centrist and conservative Republican wings behind the health care bill.

With their legislation, GOP lawmakers and President Donald Trump are working to fulfill a major campaign promise—to repeal and replace Obamacare.

Trump initially promised to dismantle the health care law his first day in office, but disagreement among Republican lawmakers has delayed efforts in Congress to do so.

Lawmakers received the text of the amendment last night, but a rough outline of the plan was leaked to the press last week.

The deal takes aim at regulations implemented under what President Barack Obama considered one of his major domestic achievements, the Affordable Care Act, which conservatives said caused premiums to rise dramatically.

Under the amendment, states can apply for federal waivers to opt out of Obamacare’s essential health benefits requirement, a list of 10 services that insurance plans are required to cover.

The measure leaves in place a provision of Obamacare that prohibits insurers from denying coverage to patients with pre-existing conditions, but allows states to waive its community ratings rules, which ban insurers from charging sick patients more than healthy ones.

States could opt out of the community ratings rules only if they implement a program designed to minimize costs for patients with pre-existing conditions, such as a high-risk pool.

High-risk pools, subsidized by the government, are insurance pools for patients with pre-existing conditions.

Additionally, only patients who fail to maintain continuous coverage could be charged more by insurers.

The amendment from MacArthur and Meadows attempts to assuage the concerns of House conservatives who, along with a bloc of centrist Republicans, opposed GOP leadership’s original health care bill.

Though Republican leaders now have the support of the Freedom Caucus, it’s unclear if the revised plan will have the backing of centrist Republicans.

Members of the centrist Tuesday Group told reporters Wednesday they needed more time to look over the amendment.

The revised bill has swayed influential conservative groups, however.

Club for Growth and FreedomWorks, which both opposed the original bill, announced their support for the amendment and said they would back the bill with its addition.

“While we’re still short of full repeal, this latest agreement would give states the chance to opt out of some of Obamacare’s costliest regulations, opening the way to greater choice and lower insurance premiums,” Club for Growth President David McIntosh said in a prepared statement. “It’s a solution we’ve supported for weeks, and the time to move forward is now.”

Heritage Action for America, the lobbying affiliate of The Heritage Foundation, backed away from its key vote against the health care bill.

To be clear, this is not full repeal and it is not what Republicans campaigned on or outlined in the Better Way agenda. The amendment does, however, represent important progress in what has been a disastrous process. Given the extreme divides in the Republican Party, allowing Texas and South Carolina to make different decisions on health insurance regulations than New York and New Jersey may be the only way forward.

Discussions over the health care bill began early last month after Republican leaders revealed their plan to repeal and replace Obamacare, a yearslong promise to voters.

Lawmakers were supposed to vote on the original legislation twice late last month. But House Speaker Paul Ryan delayed one vote and then abruptly pulled the bill the next day after it became clear not enough Republicans supported it.

GOP leaders and the White House are discussing a potential vote on the revised bill Friday, according to Axios, and the House whip team is counting votes.

Ryan, R-Wis., told reporters at a press conference earlier Wednesday that the lower chamber would vote “when we’ve got the votes.”

Still, the speaker said the MacArthur amendment “helps get us to consensus.”

We think the MacArthur amendment is a great way to lower premiums, give states more flexibility while protecting people with pre-existing conditions. Those are the three things we want to achieve.