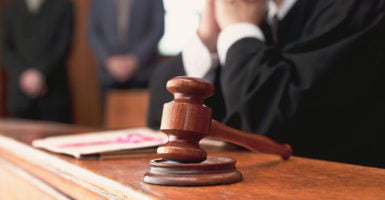 Judge William Orrick's injunction against the president's executive order does not block the Justice Department or Department of Homeland Security from cutting off certain discretionary grant programs as punishment for sanctuary cities. (Photo: iStock Photos)

Media sources are all breathlessly reporting that the Trump administration’s proposed termination of federal funding to sanctuary cities has been enjoined by a federal judge.

But that is misleading, and the media is misinterpreting the injunction order in the same way the federal judge misinterpreted President Donald Trump’s executive order.

At issue in the lawsuit filed in San Francisco federal court by Santa Clara County and San Francisco was Section 9 of Executive Order 13768, “Enhancing Public Safety in the Interior of the United States.”

If you read all of the news accounts, as well as the order of Judge William Orrick (an Obama appointee), you would think that Trump ordered the cutoff of all federal funding to sanctuary cities, from basic federal entitlement payments like Medicaid to discretionary grants.

Orrick even recites, for example, the $1.7 billion in “federal and federally dependent funds” Santa Clara County got in 2015-2016, which he acknowledges “includes federal funds provided through entitlement programs.”

But Section 9 does not affect federal entitlement programs. It is very narrowly focused. It states that it is the policy of the executive branch to ensure compliance “to the fullest extent of the law … with 8 U.S.C. 1373.”

In other words, the policies that Santa Clara and San Francisco have in place that prevent their local police from notifying ICE when they arrest or detain an illegal alien clearly and unambiguously violate federal law.

Section 9(a) of the executive order directs the attorney general and the secretary of the homeland security “in their discretion and to the extent consistent with the law” to “ensure that jurisdictions that willfully refuse to comply with 8 U.S.C. 1373 [sanctuary jurisdictions] are not eligible to receive Federal grants, except as deemed necessary for law enforcement purposes by the attorney general or the secretary.”

First of all, as the government argued, the plain language of this provision is limited to “grants” and does not affect entitlement funding at all.

There is no threat here, direct or implied, to cut off federal entitlement funding and access to programs like Medicaid or the Highway Trust Fund.

So an injunction that prohibits the government from denying entitlement funding to sanctuary jurisdictions is essentially meaningless (although Congress could certainly act to try and do this).

Second, Section 9(a) is directed to the attorney general and the secretary of homeland security. So again, it clearly only affects discretionary grants within the Justice Department and the Department of Homeland Security, not grants given out by other executive departments and agencies.

As Horowitz pointed out, any local jurisdiction applying for federal grants under these programs already had to certify in their applications that they complied with all “applicable federal statutes.”

Thus, according to the inspector general, only jurisdictions who are complying with Section 1373 are eligible for these grant programs.

According to Orrick’s order, there is also a third grant program in the Department of Homeland Security that the government argued has a similar requirement for compliance with 8 U.S.C. § 1373.

Orrick discounted the limiting language in the executive order, claiming that Section 9(a) was “not readily susceptible to the government’s narrow interpretation” that it only applies to grant programs that require compliance with Section 1373.

Further, he claimed that to try to read out of Section 9(a) all of its “unconstitutional directives” would “render it an ominous, misleading, and ultimately toothless threat.”

But what is implausible is the judge’s overbroad reading of a provision that specifically and particularly limits its applicability only to the attorney general and the secretary of homeland security.

Orrick violates the most basic canon of legislative interpretation, which is to adopt a narrow reading of a statute if a broader one would raise constitutional issues.

He does exactly that in viewing the rather narrow language of Section 9 as something that could apply to federal funding as a whole and to departments outside of Justice and Homeland Security.

With that broad reading, he claims that the executive order raises problems under the Spending Clause of the Constitution because the executive branch is adding conditions to the receipt of federal funds—something only Congress has the power to do.

Orrick also holds that the plaintiffs were likely to succeed in their Fifth Amendment due process claim because Section 9(a)—which seems pretty clear to me—was “void for vagueness.”

Orrick also justifies his overly broad reading of Section 9 by claiming that through their public statements, the president and the attorney general have endorsed “the broadest reading of the order.”

He specifically cites a statement by Trump that the executive order is a “weapon” against jurisdictions that disagree with his immigration policies, and a statement by his press secretary that the president intends to ensure that “counties and other institutions that remain sanctuary cities don’t get federal government funding in compliance with the executive order.”

He cites Sessions as saying that those not complying with Section 1373 would suffer “withholding grants, termination of grants, and disbarment or ineligibility for future grants.”

The attorney general was simply pointing out what the order actually says about sanctuary cities that violate Section 1373 not being eligible for Justice grants.

On the final page of his 49-page order, Orrick issues a nationwide injunction against Section 9(a) of the executive order.

However, he then says that the “injunction does not impact the government’s ability to use lawful means to enforce existing conditions of federal grants or 8 U.S.C. 1373, nor does it restrict the secretary from developing regulations or preparing guidance on designating a jurisdiction as a ‘sanctuary jurisdiction.’”

It seems that the judge has issued an injunction against his own imaginary view that the government would use Section 9(a) to cut off a broad range of federal entitlement funding, instead of simply the discretionary grant programs at the Justice Department and the Department of Homeland Security.

Thus, the exception to the injunction described by Orrick seems to allow the Trump administration to go ahead with what it has actually been planning to do all along: cut off eligibility to grant programs like the two specifically mentioned by the inspector general in his 2016 memorandum that already require compliance with Section 1373.

So while this injunction order has been painted as a big loss for the administration, it actually doesn’t seem to fit that definition.

Sanctuary cities are still going to suffer the consequences of their lawless behavior. They’ll lose some federal discretionary funds from the Justice Department and the Department of Homeland Security.