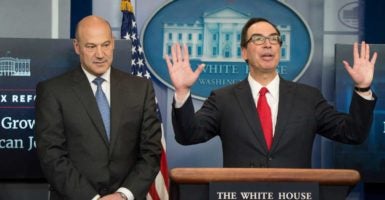 When a reporter asked if deducting taxes on state and local income taxes would also be eliminated, Treasury Secretary Steven Mnuchin answered, “Yes.”

“We are going to eliminate on the personal side all tax deductions other than mortgage interests and charitable deductions,” Mnuchin said at a White House press conference Wednesday.

House Republicans were already reportedly considering eliminating the deduction on state and local taxes, which could disproportionately affect wealthy people in high-tax blue states such as New York and California.

“The current policy subsidizes high-tax states,” Williams told The Daily Signal in a phone interview. “Using that revenue to pay for cutting rates across the board is a step in the right direction.”

The Trump tax plan would reduce the number of tax brackets from seven to three brackets of 10 percent, 25 percent, and 35 percent. The plan would not tax the first $24,000 in income for a couple, which is double the current standard deduction.

The Trump plan would repeal the alternative minimum tax, phaseout the death tax, and repeal the 3.8 percent surtax on investment income used to fund Obamacare.

On the business side, the corporate tax rate will be cut to 15 percent, from 35 percent. Also, the government would only tax a business’s income from inside the United States, not income from abroad. This is common in other countries and is known as a “territorial tax system.”

Gary Cohn, director of the National Economic Council and Trump’s chief economic adviser, told reporters tax reform is a “once-in-a-generation opportunity to do something really big.”

The last sweeping reform came in 1986.

In 2017, we are still stuck with a 1988 corporate tax system. That’s why we are one of the least competitive countries in the developed world when it comes to taxes. So tax reform is long overdue.

House Minority Leader Nancy Pelosi, D-Calif., said the plan is the “same trickle-down economics that undermined the middle class,” and said the president should work on a fiscally responsible bipartisan plan with Democrats.

“Instead of focusing on hardworking families as he promised, President Trump’s tax outline is a wish list for billionaires,” Pelosi said in a public statement. “What few details are here overwhelmingly cut taxes for the richest and do little for middle-class Americans and those trying to get there. Besides which, nowhere does President Trump indicate how his deficit-exploding tax plan will actually be paid for.”

Adam Michel, a tax policy analyst with The Heritage Foundation, said he believes the proposal shows Trump is serious about reform:

For too long, America’s out-of-date and overbearing tax system has put a damper on economic growth while punishing savings and investment. The president’s plan is a great starting point. Now, the president and Congress must work together to finally update our broken tax system. True reform should apply the most efficient and least economically destructive forms of taxation, have low rates on a broad base, and be as transparent, predictable, and simple as possible.

“President Trump has re-energized the drive for fundamental tax reform that creates growth and jobs,” Norquist said in a public statement. “The plan cuts taxes for businesses and individuals and simplifies the code so Americans can file on a postcard. Reducing taxes on all businesses down to 15 percent will turbocharge the economy.”

Mnuchin called the current 35 percent corporate rate “perhaps the most complicated and uncompetitive business rate in the world.”

He said he anticipates the proposal would return the U.S. to greater than 3 percent growth without an adverse impact on the debt or revenue. Throughout most of the Obama administration, economic growth didn’t surpass 3 percent in a single year.

“This plan will lower the ratio of debt to [gross domestic product]. The economic plan under Trump would grow the economy, will create massive amounts of revenues,” Mnuchin said.

The plan is a net tax reduction, Williams said, and fundamental reform takes cronyism out of the tax code, which could help Trump keep another promise.

“Draining the tax code swamp is a good way to go about getting rid of all those special interest loopholes,” Williams said.