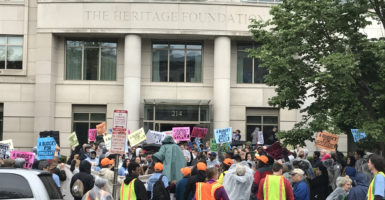 Demonstrators and activists opposed to President Donald Trump descended upon The Heritage Foundation on Tuesday to protest the think tank’s budget plan and attempt to bring the organization to a halt.

The group spent nearly an hour at the think tank, holding signs stating “A Budget for the People,” “A Budget for Health Communities,” and “A Budget for Immigration” and chanting “water not walls” and “shut it down” before moving to protest outside of The Heritage Foundation’s Capitol Hill headquarters.

There, a number of speakers addressed the crowd of activists and criticized Heritage for the role it played in crafting Trump’s budget.

“Trump is a puppet of The Heritage Foundation,” one woman told the crowd outside of the organization.

Protesters criticized The Heritage Foundation for its “Blueprint for Balance,” a 230-page document with recommendations for the 2018 budget.

The budget document was crafted by more than two dozen scholars at the think tank.

Trump adopted many of the recommendations from The Heritage Foundation’s 2017 “Blueprint for Balance,” released last year, in his own 2018 budget, which the protesters disagreed with.

However, it’s ultimately the responsibility of Congress to draft and pass the federal budget.

“These groups do not represent the majority of Americans who have continually called for a return to fiscal discipline and an end to ballooning federal debt,” Sarah Mills, a spokeswoman for The Heritage Foundation, said in a statement. “If the protesters were serious about reforming the way Washington works, they would join us in fighting for an end to special interest policies that harm the American people.”

“Heritage will not back down. We will keep fighting for a responsible budget, a pro-growth tax system, a repeal of Obamacare, and a stronger national defense—only then will we have opportunity for all and favoritism to none,” she continued.

The Daily Signal made multiple attempts to speak with protesters. However, all demonstrators approached said they couldn’t speak with the media. One woman told The Daily Signal—which identified itself as being affiliated with The Heritage Foundation—that protesters would not speak with anyone from the think tank.

Event organizers who were authorized to speak with the media were not made available.

The protesters were affiliated with a group called People’s Action, a Chicago-based nonprofit founded in 2016.

People’s Action did not return The Daily Signal’s requests for comment.

The protest at The Heritage Foundation was part of a larger, three-day “founding convention” that took place this week at a hotel in Washington, D.C.

According to the organization’s website, the conference was the birthplace of a “new political force comprised of people united against the Trump-Ryan-McConnell agenda,” a reference to House Speaker Paul Ryan and Senate Majority Leader Mitch McConnell.

During the convention, attendees heard from Sen. Bernie Sanders, I-Vt.; Sen. Jeff Merkley, D-Ore.; and political activist Van Jones, among others. They also attended various trainings on issues including health care, climate change, and immigration, according to a schedule of events.

Before heading to The Heritage Foundation on Tuesday morning, conference attendees protested Trump’s budget in front of the White House. They then boarded buses bound for an undisclosed location, which turned out to be the think tank, Phillip Stucky, a political reporter for The Daily Caller News Foundation who accompanied the protesters, told The Daily Signal.

After the demonstration outside of the think tank, activists then attended a lunch with Rep. Keith Ellison, D-Minn., at the Lutheran Church of the Reformation.

"The many will overcome the money." #RiseUp2017 #ProtectOurCare pic.twitter.com/uuzpN5i1V2

So excited to be speaking to more than 700 activists with @PplsAction here in DC to fight for the Affordable Care Act! pic.twitter.com/eBE15gwIzl

The conference this week was sponsored by the Democracy Alliance, National Education Association, Communications Workers of America, and others, according to a program booklet.

According to its website, People’s Action is part of a larger network of groups, including Alliance for a Just Society, National People’s Action, and USAction Education Fund.

People’s Action and National People’s Action, a network of grassroots organizations, operate out of the same office in Chicago. The latter group was founded in 1972 and has received at least $1.3 million in funding from billionaire investor George Soros’ Open Society Foundations, according to GuideStar, an organization that tracks nonprofits.

National People’s Action was involved in an earlier protest against Trump and The Heritage Foundation that took place in Chicago last month.

On March 21, between 100 and 200 demonstrators descended on the Bank of America Building in Chicago protesting Trump’s budget cuts, some of which were proposed in The Heritage Foundation’s budget blueprint.

Fair Economy Illinois and the Jane Addams Senior Caucus, an affiliate of National People’s Action, organized the demonstration, which targeted Anthony Saliba, a member of The Heritage Foundation’s Board of Trustees.