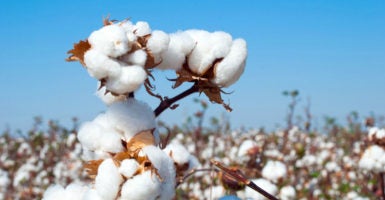 If Congress opens up the Agriculture Risk Coverage and Price Loss Coverage programs to the cotton industry, taxpayers will be out an additional $1 billion a year. (Photo: iStock Photos)

This week, Congress returns to Washington to address government funding.

Now, Congress may be poised to use upcoming spending measures to further increase the scope and costs of these programs by making the cotton industry eligible to participate in them.

If cotton is included, the cost of these two programs—Agriculture Risk Coverage and Price Loss Coverage—would further increase by an estimated $1 billion a year.

Cotton growers have lobbied Congress to be added to these programs, despite the fact that they already participate in the federal crop insurance program and had a special program created just for them in the previous farm bill (called STAX).

Taxpayers are also paying $300 million to the Brazilian cotton industry as part of a 2014 settlement agreement. That agreement was struck in order to resolve a longstanding trade dispute with Brazil in response to past U.S. domestic cotton subsidies, which violated World Trade Organization rules.

If the situation were reversed, the U.S. would likely have done the same thing as Brazil to challenge market-distorting cotton subsidies.

Congress intentionally excluded cotton from the two massive new farm handout programs because of trade concerns that would arise if cotton were part of these programs.

This is why cotton has its own program. It makes no sense to jeopardize the already costly agreement with Brazil in order to give the cotton industry even more subsidies. Such a move would risk trade retaliation from Brazil.

If the past is any indication, Congress would just pay off Brazil with even more taxpayer dollars to maintain indefensible cotton subsidies.

There’s a very clear pattern when it comes to agricultural policy: Congress is constantly ignoring the interests of taxpayers in order to keep providing seemingly endless handouts to agribusinesses, including multimillion-dollar operations.

Agricultural producers should be expected to manage ordinary business risk, just as other businesses do in a capitalist system—including small mom and pop shops.

It’s time for Congress to do something a bit “radical”: In the upcoming appropriations process, it should focus on protecting taxpayers and ensuring their money isn’t being spent in a wasteful and unjustified fashion that simply lines the pockets of agribusinesses.

This means it certainly shouldn’t add cotton to the two massive new handout programs. That would take agricultural special interest cronyism to an even more alarming level.