What This Supreme Court Case Could Mean for School Choice 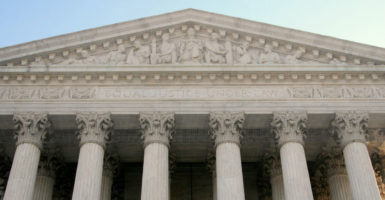 In Trinity Lutheran v. Comer, a favorable decision for the church could also have implications for school choice. (Photo: iStock Photos)

This week, a dispute over playground surfaces in Missouri made its way to the Supreme Court. At question was the constitutionality of a provision in Missouri’s state constitution known as a Blaine Amendment.

The court heard oral arguments on Wednesday for Trinity Lutheran v. Comer, a case involving a Lutheran preschool and its application to a state grant program that helps nonprofits resurface playgrounds with recycled rubber.

Trinity Lutheran Church in Columbia, Missouri, operates a preschool and daycare center, and its property includes a playground that is open to the public.

When the Trinity Lutheran Child Learning Center applied to a state grant program to help resurface its playground, its application was denied on the basis of a provision in the Missouri state constitution that prevents public aid from going to religious institutions.

The learning center’s application had initially been ranked fifth out of 44 applicants based on neutral criteria and initial review by state administrators.

The constitutional provision invoked by the state is a Blaine Amendment, so-called because of Sen. James G. Blaine, R-Maine, who championed the amendment in the latter half of the 19th century.

This period in American history was marked by intense anti-Catholic sentiment, and education became a focal point of the animosity.

Because the curriculum of the common schools of the era reflected a general Protestant civil religion, marginalized Catholics began to set up their own parochial schools and sought the same access to public funds that common schools received.

Determined to prevent Catholic schools from accessing public funds, Blaine advocated an amendment to the federal Constitution to prohibit aid to “sectarian” schools. At the time, “sectarian” was generally understood to be code for Catholic, not simply any religious organization.

While his effort failed at the federal level (by just four votes in the Senate), the language of his amendment was eventually embraced in a majority of the states.

Today, despite their origins in bigotry, Blaine Amendments or similar prohibitions remain in 38 state constitutions, including Missouri. The Supreme Court has already acknowledged and disavowed the discriminatory history of Blaine Amendments, most notably in Mitchell v. Helms, where the court found it permissible for public funds to be distributed in the form of loans to both public and private schools.

Based on oral arguments from Trinity Lutheran v. Comer, the Supreme Court is once again preparing to issue a decision on the question of state aid to a religious institution.

As Elizabeth Slattery, legal fellow in The Heritage Foundation’s Edwin Meese III Center, notes: “If Trinity Lutheran wins the day, it will be a signal to states that they may not discriminate against churches under the guise of Blaine Amendments.”

While Blaine Amendments have long threatened the exercise of religious liberty for schools and churches, they have also presented a particular obstacle in the area of school choice.

School choice opponents have repeatedly used the pretext of Blaine Amendments to challenge the constitutionality of school choice legislation.

School choice opponents argue that the public funds used in voucher or education savings account programs violate Blaine Amendments, since the money can be used at private, religious schools.

However, several state supreme courts have already determined that Blaine Amendment challenges do not affect private school choice programs because public funds are given to individual parents and not directly to religious institutions.

As a result, a decision in favor of Trinity Lutheran could have an advantageous effect for the growth and introduction of school choice programs across the country. The Trinity Lutheran case offers the Supreme Court the chance to settle crucial questions about the place of religious organizations in the public life of the nation.

It also offers hope that school choice programs in the states will no longer be held up needlessly in legal battles over Blaine Amendments, but can get right to work offering greater educational opportunities for children.