Senators Like School Choice for Their Own Kids. Why Not for Everyone? 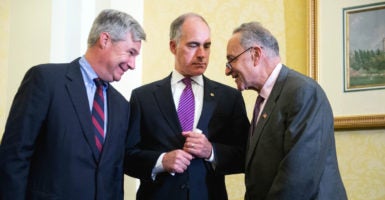 According to a 2009 survey, 34 percent of U.S. senators had at one time sent their children to private school, compared with only 10 percent of the general population who currently do the same. (Photo: Tom Williams/CQ Roll Call/Newscom)

Matthew Pelyhes is a member of the Young Leaders Program at The Heritage Foundation.

Since 2011, nearly a dozen states have enacted new tax credit scholarship programs, which provide tax credits to corporations and individuals who contribute to nonprofit organizations that provide scholarships to eligible children to attend a private school of choice.

And since 2011, states have also adopted education savings accounts, following Arizona’s successful implementation of the policy in 2011. Florida, Tennessee, Mississippi, and Nevada have already followed Arizona’s lead, while several other state legislatures are currently considering ESAs in their own states.

>>> Arizona Scored a Big Win With School Choice. Here’s How It Will Help Children.

The continued momentum of school choice efforts at the state level, paired with a presidential administration that has made school choice a priority, has brought the school choice debate to the steps of the U.S. Capitol.

Although Washington is limited in what it can do to advance education choice—confined largely to options that impact children living in the nation’s capital, children of military families, and those attending federally managed Bureau of Indian Affairs schools—the administration’s support for school choice is a welcome change of pace.

During the eight years comprising the tenure of the Obama administration, the highly successful D.C. Opportunity Scholarship Program, which provides vouchers to low-income children to attend a private school of choice in D.C., was under constant threat of being defunded.

These efforts by the Obama administration, and those opposed to education choice in Congress, begs the question: Do members of Congress themselves exercise private school choice?

The Senate’s Own School Choices

It turns out that many members of the Senate, while opposing private school choice policies that would benefit others, practice school choice themselves.

Since 2000, The Heritage Foundation has surveyed members of Congress to determine whether they had exercised private school choice by ever sending a child to private school.

The data from the most recent survey in 2009 was combined with information found through an open source search to inform this post.

The 115th Congress will likely have the opportunity to consider policies that enable parents to choose the best school for their children.

The D.C. Opportunity Scholarship Program, which provides private school tuition scholarships to low-income children, is currently up for reauthorization.

Putting that program on firm footing, and then expanding the program—which has raised graduation rates for participants by an incredible 21 percentage points—would signal a congressional commitment to giving parents greater access to the best education options for their children.

>>> Evidence in Favor of School Choice Continues to Mount

Similarly, repurposing funds for the Bureau of Indian Affairs to provide families with an education savings account option, as well as giving military-connected children more choice in their education, would help ensure many more American families have access to learning options that work to meet the unique needs of their individual children.

School choice is clearly a popular choice for members of the Senate. It’s time to bring similar options to more families across America.