Even With Republicans in Charge, Upcoming Budget Battle Looks Grim 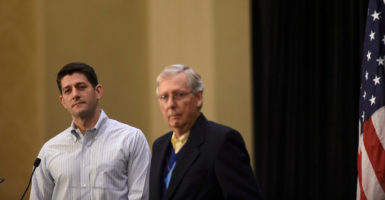 And so it begins. The GOP surrender in the budget battle.

Despite all the campaign promises to “rein in government” and “get the country’s fiscal house in order,” the groundwork is already being laid by Republican lawmakers to explain why they just aren’t going to be able to put the brakes on spending after all.

Unless Congress passes a budget by the last week of April, just four days after they return from a two-week recess, funds for the federal government will officially run out.

Such looming deadlines are almost always bad news for taxpayers as members of both political parties usually decide the only path forward is to spend more money. That is one of the main reasons America is currently $19.9 trillion in debt and counting.

Considering Republicans now control both houses of Congress and the White House and that President Donald Trump has called for significant cuts across the board in his initial budget proposal, one would think maybe, just maybe, this time things would go differently.

Apparently not. The script of the past eight years is about to play out again.

Republican lawmakers who suggest they can’t support a spending bill because of what it does or doesn’t include will be accused of shutting down the government, all to appease their base.

But now that a GOP president is sitting in the White House, Republicans in Congress should be rewriting the script.

They should be calling the Democrats’ bluff and put forward legislation that does what they promised—reins in government spending, starts addressing America’s debt, and secures our border and national security needs.

If enough Democrats in the House and Senate don’t vote for it (such legislation requires 60 votes in the Senate), they should make it clear that they will go into every state where vulnerable Democrats are up for re-election in 2018 and tell voters there that their lawmaker was responsible for shutting down the government over liberal pet causes—such as funding for sanctuary cities and Planned Parenthood—or because he or she didn’t want to allocate funds to secure our border.

Senate Majority Leader Mitch McConnell recently said about the budget process, “Nobody gets everything they want.”

That’s not the point. The question is which side will get more of what they want, and there is little evidence the GOP is on track to win that race.

And the spending addiction isn’t limited to headline-grabbing fights, like over funding the nation’s largest for-profit abortion provider. Both political parties are so addicted to government spending that they are loath to cut anything.

As recently as 2011, Congress passed something called the Budget Control Act—a law supposedly intended to “control” how much government spends.

But that proved too hard for lawmakers to live by, so instead of making tough decisions about where to cut back, they busted the caps on spending and continued to borrow more money.

This meant more money for federal government boondoggles, like subsidizing rural airline routes in Alaska and catfish inspection programs in Mississippi—two programs, by the way, championed by Republican senators in their respective states.

And those are just two out of over 100 government programs The Heritage Foundation has identified in its “Blueprint for Balance” that, if scaled back or eliminated, would reduce spending by almost $90 billion.

But once on the dole, even many Republicans just can’t seem to wean themselves off. And if you aren’t willing to fight the smaller battles, you certainly aren’t up for the big ones.

And that, sadly, is why the much-ballyhooed forthcoming budget battle, per usual, is likely to turn out to not be much of a battle at all.