What’s in the New Obamacare Deal That Could Unite Conservatives, Centrists 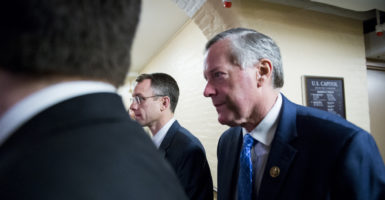 Conservative and centrist Republicans in the House are working on a deal that some say could unite the two factions and attract enough votes to pass the stalled bill to repeal and replace Obamacare.

But amid increased pressure from the White House to move forward with the plan to unravel the 2010 health care law, some conservatives have questions about the changes.

News of the deal comes as President Donald Trump nears his 100th day in office, and just days before lawmakers return to Washington, D.C., to hash out the details of a bill funding the government.

“I’m optimistic that we will have a bill that accomplishes all the goals that so many of us have campaigned on, promised, and yet the work’s not done,” Meadows told the Asheville (North Carolina) Citizen-Times.

According to a draft of the amendment obtained by Politico, the plan allows states to apply for “limited waivers” to opt out of Obamacare insurance mandates—a change designed to address conservatives’ concerns with the legislation.

Under the waivers, states could eliminate a requirement mandating the services that insurance plans must offer—the essential health benefits requirement—and another prohibiting insurers from charging patients more based on health status—known as community rating rules.

States also must prove, according to the document published by Politico, that “the purpose of the requested waiver is to reduce premium costs, increase the number of persons with health care coverage, or advance another benefit to the public interest in the state, including the guarantee of coverage for persons with pre-existing medical conditions.”

The second part of the deal, which seeks to sway centrist Republicans, keeps some Obamacare regulations in place that have grown in popularity over the years, including the ban on insurers from discriminating against patients with pre-existing conditions.

The proposed changes from Meadows and MacArthur attempt to reconcile the differences between conservatives in the House Freedom Caucus and centrist Republicans.

Both factions revolted against leadership’s original health care bill, called the American Health Care Act, but for differing reasons. House Speaker Paul Ryan pulled the bill from the floor March 24 for lack of votes to pass it.

Conservatives said the plan didn’t combat the rising cost of premiums, while centrists worried sick patients would be deprived of access to affordable, quality health insurance.

Though the amendment seeks to bring Republicans closer to the 216 votes needed for the health care bill to pass, members have yet to see the legislative text.

A vote next week—occurring at the same time Congress debates a government spending bill—would give lawmakers little time to read the plan.

“My first instinct is that if you don’t give me time to read something, there’s probably something there that I’m not going to like, and that’s why you’re rushing it through,” Rep. Andy Biggs, R-Ariz., told The Daily Signal. “I prefer that you give us time to read it.”

Biggs, a member of the Freedom Caucus, said he still has questions about the plan, which resembles an offer put forth by Vice President Mike Pence before Republicans departed for their home districts for Easter recess.

“As what I’d like to call a new federalist, I don’t think that states should be having to clamor and jump through whatever hoops the federal government insists upon in order to make the decisions for their citizens,” Biggs said, referring to the waiver process. “I happen to like and respect [Health and Human Services Secretary] Tom Price immensely, but that doesn’t mean the next person will share that same approbation from me. [States] are going to be reliant on whoever that is, even under a Republican regime. That’s a problem.”

According to The Huffington Post, Republican leadership in the House and Senate continue to review the amendment.

But the White House is pushing for the House to vote on the newly revised plan next week, and Republicans are expected to discuss the path forward on a conference call Saturday.

“I know that our team has continued to work with members of the House in particular to see if there’s a way forward,” Spicer said. “And fortunately for us, I think the appetite to really get this done continues to grow.”

Ryan, too, said his conference continues to make progress on a plan. During a speech in London on Wednesday, the speaker said Republicans are “very close” to agreeing on a bill that can pass the lower chamber.