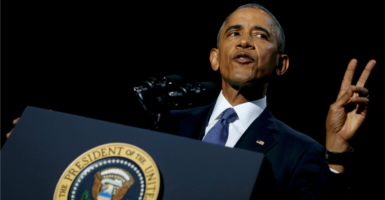 Proposals to further balkanize America through the 2020 Census were left behind by the Obama administration in its last few days in office. (Photo: Jonathan Ernst/Reuters/Newscom)

There are only 10 days left to comment on one of the most important early challenges in the young Trump administration: proposals to further balkanize America through the 2020 census.

This poison pill was left behind by the Obama administration in its last few days in office. On Sept. 30, an interagency group proposed to the Office of Management and Budget two changes that would create new ethnic cleavages and work to preserve existing ones.

The Obama people just assumed that the Clinton administration would just rubber-stamp these changes. Then the Nov. 8 election happened.

Now the Trump administration is asking Americans to comment on whether we really want to do this by commenting here. For conservatives who care about promoting a united country with a national purpose, and who want to put a stop to the reinterpretation of America as a nation of adversarial groups, the answer should be no.

One proposal would mean that Americans and U.S. residents of Middle East and North African origin would now be reclassified as a single and unified minority group. Included in the proposed category would be Arab-Americans whose families have been here for generations, including such figures as actress Marlo Thomas; Rep. Darrell Issa, R-Calif.; and activist Ralph Nader.

Arab-Americans are estimated to be majority Christian and have a higher median income than average Americans. They have been classified as white in the U.S. Census and other government documents for over a century.

Also included are Iranian-Americans, many of whom are professionals who emigrated here around the fall of the Shah in 1979 and who have per capita average incomes estimated to be 50 percent higher than the nation.

Added to this incongruous group are also Americans with origins in Morocco and Algeria, Kurds, and at one time even Israelis, though the OMB has desisted from that after protests.Middle East and North African excludes people who originate from Pakistan or Afghanistan.

The second proposal would effectively mean that people of Latin American or Iberian origins would no longer be able to declare whether they are also black, white, or “some other race.” This change would practically make “Hispanic” their only racial identifier.

It would so by collapsing what are now two separate questions—Are you Hispanic or not? What race are you?—into one: What is this person’s race or origin?

As I explained in The Wall Street Journal last month, the proposed new census form would define “white” as “German, Irish, English, Italian, Polish, French, etc.” If you are “Mexican-American, Puerto Rican, Cuban, Salvadoran, Dominican, etc.,” you are directed to check the box for “Hispanic, Latino or Spanish origin.”

Proponents say responders can always check more than one box. The reality is that given the way the questions are framed that is unlikely to happen.

As a long study that the government released in February makes clear, the growing number of Americans of Spanish or Portuguese ancestry who are checking the “white” box—more than 29 million out of 56 million in the 2010 Ccnsus—would be nudged away from doing so.

These changes are very important to conservatives as they would harm the country in long-lasting ways. As I said in my own comment earlier this month:

(1) adding one more ethnic group would further sub-divide America along ethnic lines and take another step to transform the U.S. into what the Founders never intended, a nation of groups;

(2) creating a Hispanic race would deepen these fractures and threaten to make them permanent, and

(3) dangling purported advantages such as congressional redistricting would further help perpetuate divisions within the country by giving people an incentive to identify themselves as a member of a subnational group and a disincentive to build inter-ethnic coalitions.

Group identity politics is the lifeblood of the liberal project. As Michael Lind wrote in Politico a year ago, “If increasing numbers of Hispanics identify as white and their descendants are defined as ‘white’ in government statistics, there may be a white majority in the U.S. throughout the 21st century.” Many groups are also concerned that the number identifying as black Americans will also be reduced.

As Arthur Schlesinger Jr. cautioned us in his book, “The Disuniting of America,” around the time of the last large addition of groups, under the Clinton administration, the ethnic reinterpretation of the country “reverses the historic theory of America as one people—the theory that has thus managed to keep American society whole.” The new underlying philosophy is that “division in ethnic communities establishes the basic structure of American society.”