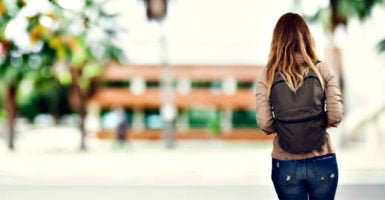 The 16-year-old girl said she put the water gun in her backpack and then, the same day, on the back seat of her car in the school parking lot. (Photo: iStock Photos)

What is the appropriate punishment for a high school student found on campus in possession of a water gun?

The Autauga County Board of Education, which covers communities near Montgomery, Alabama, decided that a 16-year-old girl with a water gun was in violation of the board’s firearms policy. So Sara Allena “Laney” Nichols received a one-year expulsion.

According to a report in the Montgomery Advertiser, Laney explained that she acquired the water pistol “as a joke” from a male classmate in a school hallway at  Prattville High School.

The school’s security cameras captured footage of Laney holding the toy gun, but not of the male student holding it at any time. He received no punishment.

Laney said she put the water pistol in her backpack and then, the same day, on the back seat of her car in the school parking lot. It went unnoticed by the principal and school officials until a classmate reported to the administration a few days later that Laney had a gun.

Prattville High officials, following proper procedures, questioned Laney. She told them that the purported gun was really a water gun and was in her car, parked on school grounds, at that time. Confirming that Laney, in fact, possessed a harmless piece of plastic, school officials successfully cleared the threat.

Laney’s mother, Tara Herring, says her daughter got a 10-day suspension. Herring conceded that the black water pistol may have looked like a real gun at first glance, but is made of plastic and clearly distinguishable the second someone touches it.

That could have been the end of the story, but the school board decided to hand down a one-year expulsion for Laney’s violation of the Parent/Student Code of Conduct, which classifies possession of a weapon as a “major offense” punishable by expulsion.

The board’s Policy Manual prohibits students from possessing firearms on school grounds, including cars parked in the school lot. “Any student who violates this policy shall be expelled for a period of one year,” it says.

The Policy Manual, however, also provides that the superintendent of schools “may modify the expulsion requirement on a case-by-case basis.” Thus far, Superintendent Spence Agee has declined to comment on the incident, although if he has any common sense, he’ll modify this draconian penalty.

Also at issue is whether Laney’s water pistol even qualifies as a prohibited firearm under school board rules. The Code of Conduct broadly defines a firearm as an object that “is designed to, or may readily be converted to expel a projectile by the action of an explosive charge or by compressed air or by spring action.”

A water gun could fall under this broad definition of a firearm only if water qualifies as a projectile and the plastic toy uses compressed air or a spring mechanism to release it. Surely, the board did not envision a harmless water gun when it adopted its firearm prohibition.

The Policy Manual provides an even stricter definition by adopting the definition of a firearm provided by federal law (18 U.S.C. § 921). Under the statute, a “firearm” is “any weapon (including a starter gun) which will or is designed to or may readily be converted to expel a projectile by the action of an explosive.” Notably, not a water gun.

Laney’s water pistol is not a firearm under the adopted definition of Autauga County schools’ Policy Manual.

Education officials are understandably hypersensitive to threats of guns on campus, but the danger posed by real guns at school should not allow for a gross overreaction that could derail a student’s academic career.

In this case, Agee should yield to reason, if not compassion, and use his discretion to modify the expulsion or yield to the statutory definition of a firearm to reduce the level of Laney’s offense.

Laney’s family has hired a lawyer and is threatening to sue if the school board does not act to remove the “scarlet letter E” (expulsion) from Laney’s record. It should not take a lawsuit to determine that a water pistol is not a firearm.

A 16-year-old girl deserves more from America’s public education system than a one-year expulsion for possession of a water gun.