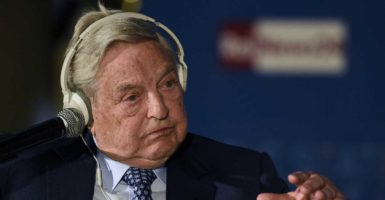 This article has been corrected and updated since publication. Details about changes are at the end of article.

Six GOP senators wrote Secretary of State Rex Tillerson in March to ask for a State Department probe into how the federal grants are being used by Soros-funded Open Society Foundations, specifically in Macedonia, to promote progressive causes and undermine conservative and moderate political leaders in those countries. The State Department Bureau of Legislative Affairs responded not by addressing the question of a probe, but defending the U.S. Agency for International Development, or USAID.

Sens. Mike Lee of Utah, James Inhofe of Oklahoma, Ted Cruz of Texas, Bill Cassidy of Louisiana, Thom Tillis of North Carolina, and David Perdue of Georgia made the initial inquiry to Tillerson. Lee hoped for more in the response.

“Sen. Lee was not satisfied with the letter and believes the matter needs to be reviewed by Secretary Tillerson,” Lee spokesman Conn Carroll told The Daily Signal in a statement. “If the State Department is unwilling to give this a serious look, we will look at options to force the issue through other means.”

Neither the State Department nor USAID responded to inquiries from The Daily Signal for this story.

In a statement, the Open Society Foundations responded:

The Open Society Foundations has a consistent non-partisan approach around the world to advancing justice, human rights, and good governance. We do this by spending nearly a billion dollars of our own money each year on non-political organizations that work to improve healthcare, education, community activism and journalism. USAID money makes up a miniscule proportion of money administered by only a handful of Open Society national foundations.  In the instances USAID chooses an Open Society national foundation to administer USAID funds – which go on to NGOs in the field – it is because we have a reputation for transparency, efficiency, and professionalism, in countries where those institutional qualities are rare. We co-fund the same organizations that other international donors such as the [European Union], USAID and private U.S., French, and German foundations fund because we share a common interest in improving the human condition.

The March 14 letter from the senators to Tillerson asks the department to “investigate all funds associated with promoting democracy and governance and review the programs, accounts, and multiplicity of U.S. entities involved in such activities.”

The letter also states that the U.S. must “review how all our tax dollars are being utilized in order to halt activities that are fomenting political unrest, disrespecting national sovereignty and civil society, and ultimately undermine our attempts to build beneficial international relationships.”

When members of a president’s own party write to a Cabinet secretary, a more direct response might be anticipated. In this case, a career State Department employee signed a letter in response—which didn’t satisfy Lee. Joseph E. Macmanus, the State Department’s executive secretary, signed a March 23 letter that never directly responded to the call for an investigation.

“USAID issues clear guidelines to its missions and implementing partners that USAID assistance programs must adhere to the principle of supporting representative, multiparty systems, and must not seek to determine election outcomes,” the Macmanus letter said.

The senators highlighted the countries mentioned above in their original letter to Tillerson, which said:

As the recipient of multiple grant awards and serving as a USAID contractor implementing projects in this small nation of 2.1 million people, our taxpayer funding foreign aid goes far, allowing Foundation Open Society-Macedonia (FOSM) to push a progressive agenda and invigorated the political left.

USAID has provided the Soros-funded Open Society Foundation $4.8 million in Macedonia, according to Judicial Watch.

In conducting its own investigation, obtaining documents, and doing interviews with officials from the U.S. and Macedonia, Judicial Watch announced in a press release Wednesday that it has learned:

The Open Society Foundations has established and funded dozens of leftwing, nongovernmental organizations (NGOs) in Macedonia to overthrow the conservative government. One Macedonian government official interviewed by Judicial Watch in Washington D.C. recently, called it the ‘Soros infantry.’ The groups organize youth movements, create influential media outlets, and organize violent protests to undermine the institutions and policies implemented by the government. One of the Soros groups funded the translation and publication of Saul Alinsky’s ‘Rules for Radicals’ into Macedonian.

In Albania, it has been reported that the Open Society Foundation has been supporting judicial reforms that would ostensibly benefit progressive candidates.  The GOP senators’ March 14 letter stated:

Foundation Open Society-Albania (FOSA) and its experts, with funding from USAID, have created the controversial Strategy Document for Albanian Judicial Reform. Some leaders believe these “reforms” are ultimately aimed to give the Prime Minister [Edi Rama] and left of center government full control over judiciary power.

This article has been updated since publication to include the Open Society Foundation’s statement, which was received after initial publication. Additionally, the piece has been corrected to reflect that the U.S. senators’ letter of March 14 expressed concern over the use of USAID grants in Macedonia. This article has also been corrected to reflect that, according to the March 14 letter from the senators, there is concern that Foundation Open Society—Albania (FOSA) is involved in judicial reform in Albania, not that George Soros himself is involved in such reform.  The paragraph mentioning the role of FOSA in Albania’s judicial reform efforts has been revised to only mention those issues directly related to judicial reform. The article was also corrected to reflect Sen. David Perdue’s correct first name.