Scott Walker Deals Another Blow to Big Labor in Wisconsin 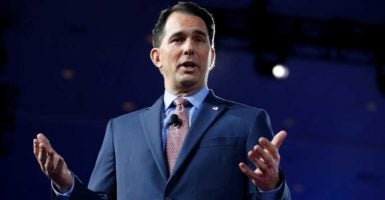 Walker signed the legislation, which passed along party lines in February, at a local distributor of construction materials in De Pere, Wisconsin, according to the Milwaukee Journal Sentinel. The governor and Wisconsin Republicans have blasted project labor agreements as a waste of taxpayer dollars.

“By forbidding state and local governments from requiring contractors to enter into agreements with labor organizations, we’re promoting healthy competition between contractors,” Walker said in a statement Monday. “This means the contractor ultimately chosen for the project is the one that has demonstrated excellent service and will work at good value for Wisconsin taxpayers,” he continued.

The legislation, Senate Bill 3, prohibits state and local governments from requiring a bidder on a public works project to enter into an agreement with a labor organization. The bill also prohibits local and state governments from considering whether or not the bidder has entered into a labor agreement as a factor when awarding a project.

Republicans point to the construction of a new arena for the state’s professional basketball team, the Milwaukee Bucks, as a reason behind the measure. The team partnered with construction companies and firms to draft labor agreements that set wages and working conditions.

The Bucks agreed to pay workers at least $12 an hour in 2017 and $15 per hour by 2023. Wisconsin taxpayers are partly funding the $500 million arena, and conservatives complained that labor agreements shut out competition and increased taxpayer costs.

The University of Massachusetts Boston provides another example of labor agreements gone awry. The university is cutting more than 20 summer courses and some fall courses as it attempts to manage a $30 million operating deficit. The deficit is due in part to a labor agreement that requires unions to be the “sole and exclusive” source of workers.

“Project Labor Agreements (PLA) not only drive up the cost of projects because of union featherbedding and inefficient work rules, but they discriminate against the 86 percent of American construction workers who choose not to join a union, by effectively banning companies with nonunion workers from bidding on such contracts,” Patrick Semmens, vice president of the National Right to Work Legal Defense Foundation, told The Daily Caller News Foundation. “PLAs are a nothing more than a handout to construction union bosses at the expense of taxpayers and nonunion workers,” Semmens said.

Democrats in the state say the legislation is another example of state GOP lawmakers seeking to limit the power of local governments in Wisconsin.

“Make no mistake, PLAs have built our country,” Stephanie Bloomingdale, secretary-treasurer of the Wisconsin AFL-CIO, said during debate of the legislation. “Why would anyone want to see local governments restrained from using an important tool that leads to projects being done on time, on budget and local people being put to work?”