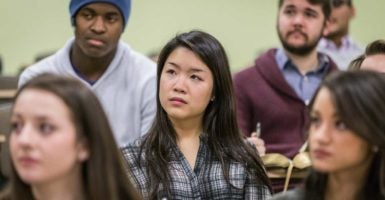 The University of Massachusetts, Boston is cutting more than 20 summer courses as the school desperately attempts to manage a $30 million operating deficit that is due in part to a project labor agreement that requires unions to be the “sole and exclusive” source of job-site labor.

The university has been plagued by controversy, ranging from declining enrollment to lackluster fundraising, but the project labor agreement is one reason why the university must now cut classes in the summer, and into the fall, reports The Boston Globe.

The university system’s building authority approved a 10-year master plan that called for $750 million in construction with a union work requirement. The requirement effectively excluded the 80 percent of Massachusetts construction workers that are not members of a union. The project labor agreement means less competition, fewer bidders, and higher costs, The Boston Globe reports.

The school’s chancellor, J. Keith Motley, announced last week that he would step down at the end of the year, but defended his 10-year record full of multimillion-dollar construction projects.

“I have no regrets because if the creator blesses me to walk on this campus three years from now and you walk it with me, I know you’ll see an incredible institution,” Motley told the university system’s board of trustees Tuesday.

The warning signs were out there as early as 2011, when UMass Boston’s 2011 strategic planning team warned that rapid growth would be expensive, and that they would have to find efficiencies wherever possible. In 2014, Ellen O’Connor, the former vice chancellor for administration and finance, warned Motley about the exorbitant construction costs.

“We are running out of money,” O’Connor said to Motley in 2014. It is unclear as to who else was made aware of the concerns, but university officials continued to move forward with ambitious expansion.

In order to make up for the massive budget deficit, adjunct faculty have been laid off, course offerings have been reduced, and database subscriptions in the school’s library have been canceled.