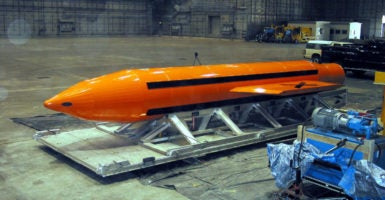 Why did America just drop the mother of all bombs?

The U.S. military on Thursday dropped its largest non-nuclear bomb, the GBU-43/B Massive Ordnance Air Blast Bomb, on an Islamic State, also known as ISIS, target in eastern Afghanistan. The bomb, which weighs 21,600 pounds and extends 30 feet long, had never before been used in combat.

In military operations, one of the considerations is to be proportional—use coercive force commensurate with the task, while taking due diligence to protect innocents.

In this case, it appears the target was an underground complex—virtually a sanctuary, impossible to get at with conventional munitions. It was an important enemy target. This particular weapon creates a massive overpressure wave that collapses the tunnel underneath.

Operationally, this could well reflect a shift in how the U.S. fights. The last administration was risk-averse. The top goal was to figure out how to disengage. There was a tendency to pull decision-making to Washington.

This White House seems more inclined to let commanders do their jobs and exercise their military judgment.

Strategically, there appears to be a shift in this administration’s plans to fight the war in Afghanistan.

While continuing to shift responsibility to the Afghans to defend their own country and win their own future, President Donald Trump looks to be tossing out the timeline, effectively saying we’ll stay until the job is done and will do what we have to do to help, but it’s in our interest to see the Afghan state standing on its own.

That the administration chose to speak publicly and plainly about the use of this weapon was clearly intended to send a message: Playtime is over.

Trump may not be interested in looking to go forth to find dragons to slay. On the other hand, he seems determined and persistent in seeing through the tasks required to protect America’s interests and warn America’s enemies to back off.