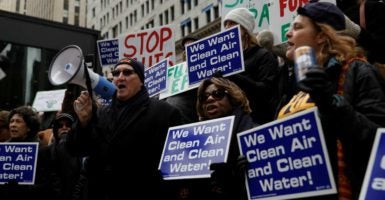 Federal employees who are members of the American Federation of Government Employees Local 704 protest at a rally on March 2 in Chicago. (Photo: John Grass/Reauters/Newscom)

In six months, the Trump administration plans to produce a plan to shrink the size of government, eliminate programs, and reduce the federal workforce—and is seeking public input on how to proceed.

“What it really means is making government more accountable to you, more effective and more efficient,” @OMBPress45 says.

As part of their planning efforts, agencies should focus on fundamental scoping questions (i.e. analyzing whether activities should or should not be performed by the agency), and on improvements to existing business processes.

Requiring agencies to justify their functions is long overdue, said Chris Edwards, director of tax policy studies at the libertarian Cato Institute. He said the “scoping” should include determining if activities are “nonessential, whether they violate federalism, and whether they would flunk a cost-benefit test.”

Still, he said the success of the plan could depend on the will of both Congress and political appointees implementing the reforms.

“This could be the best shot we have of eliminating agencies,” Edwards told The Daily Signal. “A lot will depend on the quality of political appointees, and are they committed to smaller government. During the [George W.] Bush administration, a lot of the political appointees were just corporate climbers.”

“Also, will members of Congress be supportive? After [President Donald] Trump’s skinny budget, we saw a lot of Republicans in Congress, unfortunately, defend programs in their region,” Edwards added.

Trump has moved at a very deliberative pace in filling political positions thus far, noted Robert Rector, a senior research fellow with The Heritage Foundation, who is skeptical of the plan.

“Policy changes can’t come from the bureaucracies themselves,” Rector told The Daily Signal. “Policy change needs to come through Congress and comes when you bring outsiders in to impose reforms.”

“If they did, it’s the exact opposite of what reform you would want,” he said.

In a White House video, Mulvaney said, “President Trump calls it draining the swamp. What it really means is making government more accountable to you, more effective and more efficient.”

The Mulvaney memo doesn’t outline cuts, but with the requirements, the video says, “Mulvaney is building a case to cut government a year from now.”

Mulvaney released the 14-page memo Wednesday, titled “Comprehensive Plan for Reforming the Federal Government and Reducing the Federal Civilian Workforce,” that aims to save tax dollars and require each government agency to submit a proposal to modernize and streamline operations in 180 days. The OMB is seeking input from the public, and will incorporate the final plans into the fiscal year 2019 budget proposal issues next March. President Donald Trump’s signed an executive order on March 13 directing the OMB to submit a comprehensive plan to reorganize the federal government.

The Mulvaney memo proposes “crosscutting reforms” to streamline all programs over the next four years, including reducing the number of federal employees.

But the plan will have opponents. The leader of the American Federation of Government Employees, the largest union representing federal workers, said, “There are some good ideas and some very dangerous ideas” in the memo.

One he didn’t like stresses more outsourcing, when the government already spends twice as much on contractors as employees, according to the union.

“Nobody knows precisely what these contractors do, how well they do it, who they’re hiring, or where they’re working,” American Federation of Government Employees President J. David Cox said in a statement. “In contrast, the data on federal employees’ jobs, pay, productivity, demographics, and location are completely transparent and widely scrutinized, as is appropriate.”

Cox also defended funding for the Environmental Protection Agency workforce. But the union president did find some common cause with the Trump administration’s report.

He said that it would be useful to evaluate layers of management—or the problem of having too many supervisors per worker.

“As representatives of front-line employees, AFGE members can tell you that excessive ratios of managers to workers on the front lines creates operational inefficiency and takes resources away from the direct provision of services to taxpayers,” Cox said in the statement. “The government does have too many managers and some of those positions should be converted to jobs that serve the American people.”

Reducing the workforce is important, but eliminating whole government programs is where the money is, Edwards said. The report requires agencies to justify why government should be involved in a specific function.

“There is no doubt the left has built a fortress to defend programs,” Edwards said. “Federal money goes to the states and then to city and local governments and every level will defend that money. So will government employees, contractors, and interest groups. It’s a fortress, but it’s not insurmountable. When Republicans are able to cut spending, it doesn’t hurt them politically. It usually helps them.”