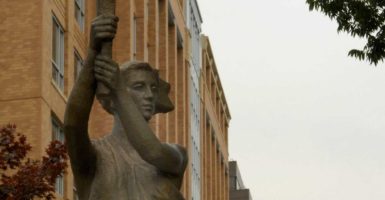 The Victims of Communism Memorial in the District of Columbia was designed to look like the “Goddess of Democracy” statue erected by Chinese students in Tiananmen Square. (Photo: Roger L. Wollenberg /UPI/Newscom)

In late March, a group of protesters staged a demonstration at a memorial dedicated to victims of communist regimes by raising their middle fingers toward it.

The group gathered at the Victims of Communism Memorial in the District of Columbia and proceeded to broadcast their obscene gesture against the statue on Twitter. According to The Federalist, the small protest was part of a larger one held against the American Israel Public Affairs Committee’s conference—a pro-Israel gathering.

The photo was posted by a Twitter user with the handle @BlackAutonomist, a black liberation, pro-Palestine activist, according to his bio. Some commenters on the photo mocked the idea that communism has victims and posted imagery of a burning American flag.

@BlackAutonomist “victims of communism”, I didn’t know the Third Reich had a memorial.

The Daily Signal contacted the protester who posted the photo, and the individual rejected the opportunity to comment.

Lee Edwards, a founder and chairman of the Victims of Communism Memorial Foundation, responded to this report by telling The Daily Signal:

“After which, I would hope they would tender an abject apology for their shameful action,” Edwards, who is also a distinguished fellow at The Heritage Foundation, added.

In contrast, Danilo Maldonado Machado, a Cuban graffiti artist known as El Sexto who was jailed under the communist regime, reacted to the memorial by posing in front of it with a solemn expression.

In response to the middle finger demonstration, Maldonado told The Daily Signal, “It is only fair that there is a monument to the indigenous victims … the victims who daily pass in these regions should [not] be disrespected.”

Maldonado also recently testified to a Senate subcommittee against the Castro regime by saying, “I ask the people and the government of the United States to pressure Raul Castro’s regime to release the thousands of political prisoners existent in my country … at least 85 percent of the present prison population would be considered innocent in any democratic country and would have never been sent to prison.”

The institution that sponsored the memorial, the Victims of Communism Memorial Foundation, is a nonprofit created to commemorate those who were victimized under communist governments. It also advocates for the freedom of people who are still living under such regimes.

>>> This Is the Percentage of Millennials Who Believe George W. Bush Killed More People Than Stalin

The memorial was opened on the 20th anniversary of President Ronald Reagan’s Brandenburg Gate speech against the Soviet Union and the Berlin Wall, in which he said, “Mr. Gorbachev, tear down this wall.” President George W. Bush dedicated the statue.

According to the Victims of Communism website, private funds were raised to pay for the memorial and it was designed to look similar to the “Goddess of Democracy” statue erected by Chinese students in Tiananmen Square, Beijing, during their bloody protest against the Chinese government.

Etched into the front of the memorial is the dedication, “To the more than one hundred million victims of communism and to those who love liberty.” The back inscription says, “To the freedom and independence of all captive nations and peoples.”