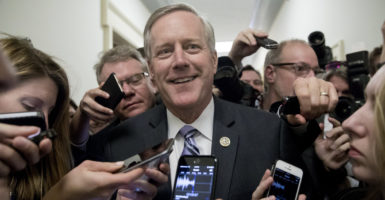 In his district for a two-week recess, Rep. Mark Meadows, R-N.C., who chairs the House Freedom Caucus, has continued to negotiate a health care bill repealing and replacing Obamacare with centrist Republicans and the White House. (Photo: Michael Reynolds/EPA/Newscom)

With members of Congress home in their districts for the next two weeks, negotiations over a health care bill repealing and replacing Obamacare remain ongoing as Republicans continue working to gain consensus on a plan.

After the House GOP’s health care bill was pulled from the floor last month, Republicans left Washington, D.C., with little progress made on their campaign promises to repeal and replace Obamacare.

But conservative and centrist Republicans have continued to discuss the path forward for health care reform with fellow lawmakers, the White House, and even Democrats in hopes of brokering a deal.

According to USA Today, Freedom Caucus Chairman Mark Meadows, R-N.C., is in “final negotiations” with Rep. Tom MacArthur, R-N.J., co-chairman of the centrist Tuesday Group, and members of House leadership of a deal they hope will win the support of a majority of House Republicans.

The plan to repeal and replace Obamacare would allow states to seek waivers to opt out of some of Obamacare’s regulations, but keep in place a provision that requires insurers to cover customers with pre-existing conditions.

“What we’re trying to do is work through issues that are important to all of us but make sure that pre-existing conditions are taken care of,” Meadows told USA Today.

Meadows and fellow members of the House Freedom Caucus have been urging Republican leaders to put forth legislation that tackles the rising cost of health insurance premiums.

Conservatives felt the original health care bill failed to do that, and in the face of considerable opposition from Freedom Caucus members and centrist Republicans, House Speaker Paul Ryan pulled the bill late last month.

Since then, Meadows has been in frequent contact with his fellow Republicans, GOP leaders, and Vice President Mike Pence in hopes of brokering a deal that repeals some of Obamacare’s insurance regulations—which conservatives say drove up the cost of premiums—but also protects sick patients.

Rep. Jim Jordan, R-Ohio, a Freedom Caucus leader, said the group has always been concerned with making sure people with pre-existing conditions are protected.

The conservative caucus backed a plan from Rep. Mark Sanford, R-S.C., that would require insurers to cover patients with pre-existing conditions so long as they maintained continuous coverage.

The Ohio Republican said the roughly 30-member Freedom Caucus supports Meadows and his efforts to find consensus on a health care bill, and Jordan said the group’s chairman has briefed his fellow conservatives. But Jordan also stressed that they want to see the proposal’s language first before agreeing to a deal.

“[Meadows] has been working hard to try to figure out a way we can actually bring down premium costs for American families,” Jordan said. “In order to do that, there are certain Obamacare regulations that have to be repealed. That’s what we’ve been focused on and we’ll continue to focus on, and we’re trying to get to an agreement there.”

While Meadows has continued talks with fellow Republicans and the White House, Rep. Charlie Dent, R-Pa., co-chair of the Tuesday Group, has been speaking with House Democrats in an attempt to pursue bipartisan health care reform, he told Axios.

“If we attempt to muscle this thing through on a partisan basis, I feel we’ll have a similar result,” Dent said, referencing Obamacare.

Working with Democrats, he said, would require Republicans to scrap the current health care bill and start over.

Joining Dent and Meadows, Ohio Gov. John Kasich, a Republican, is also getting in on the health care talks.

According to Axios, the Republican has talked to both Dent and Colorado Gov. John Hickenlooper, a Democrat, about reforming the health care system.

Members of Congress returned to their districts Friday for a two-week recess, and Republicans are already fielding questions from constituents about the future of the Affordable Care Act and their plans to replace the law.

Though lawmakers are scheduled to remain home until the end of April—they’ll return to Washington with four days to pass a stopgap spending bill—Meadows isn’t ruling out an early return.

“It’s our encouragement to have a vote as soon as we possibly can, even perhaps before we return back to D.C. in 13 days,” Meadows told a North Carolina radio station Tuesday.

“We clearly are getting closer, more votes are moving in our direction, and these ideas are very helpful as we are getting closer,” White House press secretary Sean Spicer said during a press briefing Tuesday. “We feel buoyed by the direction this is going.”

Before members left Washington, Republicans unveiled a late change to the health care bill, called the American Health Care Act, after President Donald Trump urged them to make some progress on the proposal.

On Thursday, the House Rules Committee added an amendment sponsored by Reps. Gary Palmer, R-Ala., and David Schweikert, R-Ariz.—both Freedom Caucus members—to the legislation that created an invisible risk-sharing program, which they say is intended to lower premiums and protect sick customers.

The amendment was created to address the concerns of both centrist Republicans and conservatives, who both took issue with the original health care bill and backed the change.